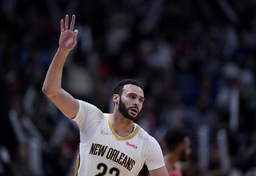 "Larry has fallen in love with New Orleans and the entire Pelicans organization - front office, coaching, players," Bartelstein said. "He's really, really excited about what's ahead for this team and he wanted to be a part of it. So, it was important to him to try to get a deal done."

Bartelstein said the deal, first reported by ESPN, runs through the 2024-25 season. That puts Nance in position to play on a club that also has power forward Zion Williamson, high-scoring wing Brandon Ingram and guard CJ McCollum under contract for at least the next three seasons

"The organization is outstanding," Nance said after practice on Saturday while standing next to Williamson and Ingram. "I took the chance to extend my stay and I'm very fortunate to be playing alongside these two.

"You don't grow up wanting to play regular season games. It's playoffs. And that's what it's all about," Nance added. "This team has a chance to do that for the long haul."

The 29-year-old Nance, who starred in college for Wyoming, was a late first-round draft choice by the Los Angeles Lakers in 2015. He also has played for Cleveland and Portland, and has career averages of 8.1 points and 6.5 rebounds.

The Pelicans made the playoffs last season without Williamson, the 2019 top overall draft choice and 2021 All-Star who had to sit out his entire third campaign because of a foot injury.

Now back to practicing at full speed, Williamson complimented the continuity that the Pelicans are working to create with several starters or prominent role players under contract for the next several seasons.

"It's great to see that because I know, especially for me, my first three years ... it was always a different cast," Williamson said. "To see some vet guys want to stay around and try to build something special, it means a lot."

Pelicans' second year coach Willie Green said the club wanted to keep Nance "in the fold for many years to come."