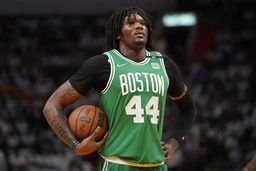 The team said the arthroscopic procedure to remove loose bodies and address swelling was a success. He is expected to resume basketball activities in 8-12 weeks.

Williams had surgery in March to repair torn cartridge in the same knee. He missed seven playoff games while rehabbing from that procedure, and after experiencing soreness in the knee and later sustaining a bone bruise.

The fifth-year big man and defensive stalwart averaged a career-high 10 points and 9.6 rebounds last season. But those numbers dipped to 7.6 points 6.2 rebounds during the playoffs.

Forward Danilo Gallinari also had surgery on Friday. Gallinari, who signed as a free agent in July, tore the anterior cruciate ligament in his left knee while playing for Italy during a FIBA World Cup qualifier against Georgia.

Gallinari tore the same ligament in 2013. The Celtics didn't provide a timeline for his return. But such injuries typically involve a recovery process of up to a year, meaning it would be unlikely for the veteran to play this season.