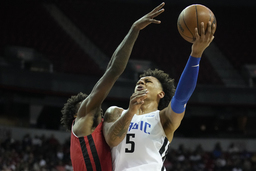 The News and Observer of Raleigh reported Friday that Banchero's citation for aiding and abetting impaired driving from a November traffic stop had been dropped.

Michael Savarino, Krzyzewski's grandson and a Duke reserve last season. pleaded guilty to driving while impaired Wednesday in a plea agreement that included community service and probation, the newspaper reported.

Authorities said Savarino was driving a Jeep registered to Banchero while Banchero was riding in the back seat. Banchero - drafted last month by the Orlando Magic - was cited for aiding and abetting impaired driving.

Orange County assistant district attorney Maren Hardin told the newspaper in an email it's "not unusual for a person charged with aiding and abetting DWI to have his or her charge dismissed upon the disposition of the principal's DWI." Hardin didn't respond to an email from The Associated Press on Friday.