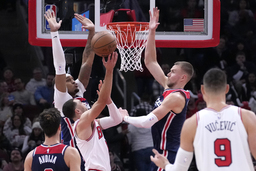 CHICAGO (AP) DeMar DeRozan scored 15 of his 27 points in the fourth quarter, Nikola Vucevic had 25 points and 11 rebounds, and the Chicago Bulls beat the Washington Wizards 115-111 on Wednesday night.

The Wizards lost their fourth in a row and played without leading scorer and three-time All-Star Bradley Beal. He strained his hamstring Sunday in a loss to the Los Angeles Lakers and will be re-evaluated next week.

Zach LaVine added 25 points as Chicago bounced back after a 2-4 road trip.

Vucevic's basket gave the Bulls a 106-105 lead with 2:50 left, and he then blocked a shot that led to a jumper by DeRozan. After Kristaps Porzingis missed a 3-pointer, DeRozan had a three-point play to put Chicago ahead 111-105 with 1:43 left.

"Vucevic, I thought really played a great game tonight from start to finish. He was really efficient. I thought he had everything going. He posted up, hit some midrange and obviously he hit some 3s," Bulls coach Billy Donovan said.

"I give DeMar and Zach a lot of credit because they struggled to shoot the ball at the level they are normally used to, accustomed to shooting the basketball," he said.

DeRozan was held to six points in the first half.

"I think they executed a little bit better. They ran their stuff, got some decent looks and we didn't," Porzingis said.

"We weren't as sharp as they were, that's experience, that's communication, a little about detail, they were just better down the stretch, but hats off to our guys, young guys, everybody played super hard even though we were missing shots, missing free throws and turning the ball over. We were all over the place", Porzingis said.

FILLING THE VOID OF BEAL

The Wizards will have to manage without Beal as they try to end the losing steak.

"It is what it is, we'll just have to do the best we can with what we have," coach Wes Unseld Jr. said before the game. "Not having him, at times in the past it was a comfort level with certain guys understanding they have to step up, absorbing a little bit more of a role and they have had some success without him. There is a comfort level there, but it's not ideal."

Wizards: Washington committed 11 turnovers in the first half and shot 2 of 15 behind the arc. ... Porzingis rolled his left ankle in the first half. "It is a little sore" said Porzingis , who was icing the ankle after the game. "When it cools down that's when I am going to feel it."

Bulls: G Javonte Green missed his second game with a knee contusion. ... G Alex Caruso started after being listed as questionable with an ankle sprain.

Wizards: At Indiana on Friday night.