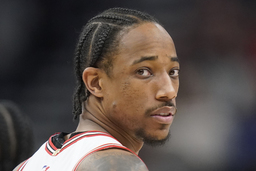 SALT LAKE CITY (AP) DeMar DeRozan had 26 points and six assists to lead the Chicago Bulls to a 114-107 victory over the Utah Jazz on Monday night.

Chicago imposed its will around the basket and on defense as the game progressed. The Bulls outscored Utah 64-44 in the paint, and they tallied 23 points off 14 Jazz turnovers.

"I thought we made good decisions coming down the stretch," Chicago coach Billy Donovan said. "I thought the guys got organized. I thought we generated good shots, even the ones we missed."

DeRozan scored 12 points and assisted on three baskets in the third quarter. He bookended a 10-0 run with a pair of free throws, giving the Bulls a 78-73 lead.

Chicago finished 22 of 25 from the free throw line.

Chicago scored three straight baskets off steals to ignite an 8-0 run and extend its lead to 94-82 early in the fourth quarter. Andre Drummond capped the run with back-to-back baskets.

"That's what we were stressing the whole game - getting stops," DeRozan said. "They started out hot in the first half. We knew in the second half we'd just have to buckle down and help each other, be there for each other on defense."

Markkanen gave Utah an early spark on offense. He made nine of his first 10 shots and hit five 3-pointers before halftime.

Markkanen made back-to-back baskets that ignited a 10-0 and put the Jazz ahead 40-31 lead early in the second quarter. Utah eventually extended its lead to 49-38 behind another pair of baskets from the Finnish forward.

"Right now, he's in a good spot," Jazz coach Will Hardy said. "Our group, our team fits how he plays and it's great to see his confidence growing. And he's playing great."

The Jazz closed within 102-99 on back-to-back baskets from Malik Beasley and Olynyk but drew no closer. The Bulls held Utah to two field goals over the final five minutes.

Both of Chicago's victories on its current six-game road trip boast a common denominator. Coby White has given the Bulls a lift off the bench in each game.

White finished with 15 points on 6-of-9 shooting against the Jazz. He helped Chicago open the road swing last Wednesday by scoring 14 points on 5-of-10 shooting in a 118-113 victory over Milwaukee. During the first three games of the road trip, White is shooting 9 of 17 from 3-point range.

"That's what Coby does," DeRozan said. "He's a game changer."

Bulls: DeRozan went 1 of 7 from the field in the first half. . Chicago outscored Utah 39-18 in bench points. . The Bulls committed only eight turnovers.

Jazz: Markkanen's 24 first-half points were a career high for points in a half. . Utah went 6 of 15 from the free throw line.

Bulls: At Phoenix on Wednesday.

Jazz: Host the Clippers on Wednesday.