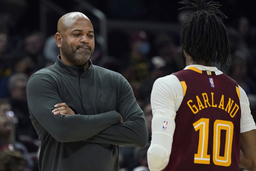 CLEVELAND (AP) Once the shot left Darius Garland's hands, the Utah Jazz couldn't do anything but hope it didn't drop.

Sometimes, defense comes down to a simple wish.

Garland missed a potential game-winner with 2.9 seconds left as the Jazz, who got 35 points from Donovan Mitchell, survived Cleveland's late surge for their fourth straight win, 109-108 over the Cavaliers on Sunday.

Rudy Gobert had 20 rebounds and five blocks, Bojan Bogdanovic added 16 points and Rudy Gay had 15 for Utah, which made 20 3-pointers and gave away a 15-point lead in the fourth.

The Cavs had a chance to win, and coach J.B. Bickerstaff put the ball in Garland's hands. But his 28-footer was long, and Jarrett Allen couldn't get his tip to drop as Cleveland had its winning streak stopped at four.

"That last possession, I knew it was going to go to him because I've known J.B. as a head coach for quite a while," Jazz guard Mike Conley said. "I just tried to stay up as high as I could and make sure it was contested. I told him (Garland), it was like playing against myself."

"If I could do it over again, I would do the same thing and let him make a play," he said.

Garland scored 31 points, Allen added 17 points and 11 rebounds and rookie Evan Mobley had 14 points and 12 rebounds for the Cavs, who were back at home after beating Dallas, Miami and Washington. It was the first time since 1975 that the Cavs won three straight on the road over teams with winning records.

"That's a really good team and they made some shots," Jazz coach Quin Snyder said as his squad opened a four-game trip. "It's a really good win for us - starting the trip with an early game in the East is not easy."

Utah opened its 15-point lead in the early moments of the fourth on Conley's 3-pointer and seemed poised to put the Cavs away.

However, as has been the case all season, Cleveland fought back.

The Cavs reeled off 15 straight points to tie it 97-all on Ricky Rubio's scoop shot with 8:43 left. Cedi Osman contributed to the flurry with a dunk, 3-pointer and steal.

"We never gave up," said Rubio, who finished with 15 points. "We've been in every single game this season."

Mitchell had a chance to put the Jazz ahead by three, but Mobley came across the lane and blocked his layup with 22 seconds to go. The Cavs corralled the ball and called time to set up a final shot.

Garland initially drove the lane, but got turned away. He wound up with the ball at the top of the key and launched his deep 3 that was long, and the Jazz survived Allen's follow attempt.

"I work on that shot every day," said Garland, who has scored 30 points in consecutive games for the first time. "It felt good. I was open."

Jazz: C Hassan Whiteside (left glute bruise) missed his first game. ... Snyder said it doesn't take long watching film for Mobley to stand out. "He's going to be a star in this league, really soon," Snyder said. "He's a rare combination of size, length, quickness and skill." ... Gay, who underwent right heel surgery in the offseason, isn't technically on a minutes restriction. Gay is averaging 18.7 minutes coming off the bench. "There's the challenge of getting back into game shape," Snyder said. "Fatigue can be an issue, especially the way we want to play." ... Gay topped 17,000 career points.

Cavaliers: Didn't get called for a foul in the first 17 minutes and finished with just eight, tying the league low this season. ... F Kevin Love entered the day leading the NBA with a .949 free throw percentage (37 of 39). The five-time All-Star is an 83% career shooter from the line, finishing above 90% just once. ... Garland and Atlanta's Trae Young are the only players averaging at least 19 points, seven assists and shooting over 45%.

Gobert's size troubles most teams, but not the Cavs.

J.B. Bickerstaff countered the 7-foot-1, shot-swatting center by starting 6-foot-11 Allen along with 7-footers Mobley and Lauri Markkanenen, a "tall ball" lineup that has been a revelation for the Cavs.

"There were some moments when we were discombobulated because there was a lot going on in that game with Allen, Mobley and Markkanen," Snyder said.

Garland added five assists, four rebounds and four steals. He's the first Cleveland player to score 30 points while reaching those other marks since LeBron James in 2018.

"Garland is going to be a hell of a player," Mitchell said. "I was trash talking him all day, but l will say I respect his game."