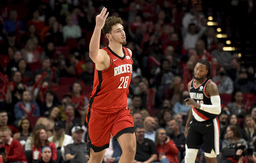 After scoring only four points on three attempts in Friday's win against the Blazers, Sengun was determined to not have a repeat performance.

"I was angry with myself because I wasn't focused yesterday," Sengun said. "I knew I was going to play well today because I was (ticked) off."

The consecutive victories are Houston's first since winning back-to-back games in mid-January.

Trendon Watford led the Blazers with 15 points and 10 rebounds before leaving late with a knee injury. The team announced a few hours after the game that Watford will be sidelined at least a week with a hyper extended knee and bone bruise.

With 3:01 remaining, Watford fell to the court and grabbed at his left knee after awkwardly stepping on the foot of Houston's Dennis Schroder. Watford was helped to the locker room by teammates and coaches, unable to put any weight on his left leg.

Blazers coach Chauncey Billups said the team was "all playing for the best news, obviously," and Watford was undergoing an MRI. The team later said Watford will be re-evaluated after sitting out a week.

After a layup by Watford gave the Blazers a one-point lead to start the second half, a 3-pointer by Green put the Rockets ahead 63-61. Houston's third-quarter lead grew to as much as 10 before the Rockets went into the fourth quarter with an 85-78 lead.

Houston avoided an injury scare late in the third quarter after Green's knee collided with Portland's Keon Johnson with seven seconds left in the third quarter. Green walked to the locker room momentarily, but quickly returned to the Rockets bench. Green returned with 5:29 left after a 3-pointer by Sengun gave the Rockets what was their biggest lead at 103-90. Green had a ferocious block shortly after returning. Another 3-pointer by Sengun pushed the Rockets' lead to 15.

After making only 3-pointers Friday night, the Blazers eclipsed that night's total in the first quarter (four), helping Portland take a 28-24 lead after one.

An alley-oop dunk by Josh Christopher gave the Rockets their first lead of the game at 31-30 with 10:31 remaining in the second quarter. The teams exchanged leads several times from then on before the teams went into halftime tied at 60.

Rockets: After a rare road win, coach Stephen Silas emphasized to his team the need to put the result behind them. "They're not going to want to get beat two games in a row. It's our approach. Our focus on what it takes to win. It's going to be everything," he said. ... The Rockets also accomplished a first on Saturday, winning a game without guard Eric Gordon in the lineup for the first time in 18 tries. They were 0-17 in their first 17 games with Gordon inactive.

Trail Blazers: After making 16 fewer 3-pointers than the Rockets on Friday, Billups emphasized he wanted to see Portland create more quality 3-point looks. Billups even said the Blazers could look across the court for how to hunt for long-range shots. "They made 19 3s in the game, it's tough to absorb that especially when we go 3 for 20," Billups said. "They were doing a great job of creating good-looking 3s. We went 3 for 20, but we weren't getting quality shots. We have to be better there, too." ... The Blazers lost forward Greg Brown to an eye contusion in the first quarter. Billups said after the game Brown was seeing an eye doctor to determine the severity of the injury.