Bridges, Hornets bounce back with 107-101 win over Jazz 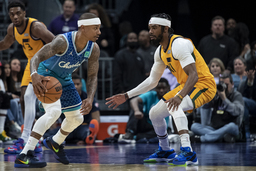 CHARLOTTE, N.C. (AP) Miles Bridges had 26 points and 11 rebounds, Terry Rozier added 25 points and the Charlotte Hornets bounced back from an ugly loss to beat the Utah Jazz 107-101 on Friday night in front a sellout crowd.

LaMelo Ball added 21 points for the Hornets, who had their five-game win streak snapped Wednesday with a disappointing 15-point defeat to the New York Knicks.

Charlotte (38-36) wrapped up a five-game homestand with a 4-1 record and pulled within a half-game of the Brooklyn Nets for the eighth spot in the Eastern Conference.

"That's a high-caliber, championship-level team, so for us to execute in a close game (against them) speaks volumes about our team and how far we've come," Hornets coach James Borrego said. "The growth, the resiliency and the togetherness. ... I'm really proud of our guys."

Donovan Mitchell had 26 points to lead Utah, but missed two key shots in the final minute. Jordan Clarkson had 19 points and Rudy Gobert added 11 points and 19 rebounds for the Jazz (45-27), who have lost three straight.

The Jazz entered the game tied for fourth place in the Western Conference with the Dallas Mavericks and in need of a win as they look to host a first-round playoff series. The Mavericks played later Friday night against the Minnesota Timberwolves.

Utah led 78-77 entering the fourth quarter after Clarkson beat the buzzer by scoring off an offensive rebound.

The teams went back and forth from there with the lead changing hands a total of 17 times before Rozier knocked down a leaning 3-pointer from the right wing to put Charlotte on top for good at 102-99 with 1:08 to go.

After Mitchell answered with a jumper in the lane to cut the lead to one, Bridges drove the lane and was fouled by Gobert and made both free throws to push the lead back to three. That's when Mitchell got free in the lane, but missed a layup in the paint with 24 seconds left after putting too much on the ball thinking the shot was going to be contested.

Mitchell could only laugh at himself after the miss as he walked back, down the court.

"You saw my reaction, I just started laughing," Mitchell said. "I'm not like `whatever' about it, I want to win the (darn) game. ... I'm not laughing because it's a joke, I'm laughing because of the level of frustration."

Rozier added two free throws with 17.6 seconds left to make it a two-possession game. Mitchell's 3-point attempt on the ensuing possession hit the top of the backboard, allowing the Hornets to escape with their fifth win in six games.

"When we play defense, we are in every game and competing in every game," Bridges said. "So overall we have been doing a good job of just staying focused."

The last time the Hornets played the Jazz in December, Utah had 68 rebounds - including 22 offensive boards - as they outrebounded the Hornets by 17. On Friday night, it was a different story as Charlotte won the boards, 45-38.

"Every time we play against Utah we get killed on the boards," Bridges said. "Today I think we put our foot down and did what we had to do and kept them off the glass."

Jazz: Hassan Whiteside did not play after being listed as questionable earlier in the day with a sprained right foot. ... Juancho Hernangomez, who started in place of Eric Paschall, took a hard foul on a dunk attempt in the third quarter and appeared to land on his forearm. The 6-foot-9, 215-pound forward was slow to get up, but appeared to be fine.

Hornets: Gordon Hayward missed his 19th straight game with a left ankle sprain. ... Outscored the Jazz 52-40 in the paint.