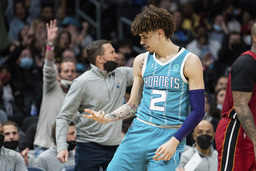 DETROIT (AP) LaMelo Ball had 31 points and 12 assists, Terry Rozier added his second career triple-double and the Charlotte Hornets ended a six-game losing streak with a 141-119 win against the struggling Detroit Pistons on Friday night.

The Hornets scored a franchise-record 79 points in the first half. It was their second-biggest total in any half, trailing only the 87 they scored in the second half against the Indiana Pacers last month.

"That was fun," Charlotte coach James Borrego said. "We came out with an aggressive attitude and a fun, joyful spirit. We were out there talking and encouraging to play hard."

"When you allow 36 and 43 points in the first two quarters, you obviously aren't playing a lot of defense," Pistons coach Dwane Casey said. "We got too enamored with trying to trade shots with Charlotte and play at their pace. That's not a game we're going to win."

"We made 18 3-pointers, which is huge for us," Borrego said. "When we are able to shoot like that from outside, it opens up so much more of our offense, which is going to mean we're looking at a good night."

Montrezl Harrell had 15 points in his Charlotte debut, one day after being acquired from the Washington Wizards for Vernon Carey Jr., Ish Smith and draft picks.

"Maybe I should give Trez the credit for my triple-double," joked Rozier, who played with Harrell at Louisville. "It's great to have him here, but I just went out and played the same way I always do. I just looked up at the scoreboard and noticed I was filling everything up."

Saddiq Bey led the Pistons with 25 points, and Cade Cunningham had 12 points and six turnovers in his return after missing six games with a hip injury.

"We're a young team, but we are getting paid to do this job," Cunningham said. "We weren't physical tonight and we weren't doing anything to make things hard on them."

Marvin Bagley III joined the Pistons as part of a four-player trade at Thursday's deadline, but hadn't completed his physical in time to play against Charlotte.

Charlotte led 79-55 at the half, making it the second straight night that the Pistons were down by at least 20 after two quarters at home. The Hornets shot 56.9% from the floor, including 45% on 3-pointers, while Detroit shot 46% and missed 14 of 17 3-pointers.

"Before the game, we emphasized starting quickly and avoiding the big deficits we've getting into lately," Bey said. "Obviously, that didn't happen."

Bell added 11 points in the third as Charlotte continued to score at will. They led 110-87 going into the fourth and were never challenged down the stretch.

"We were doing a great job of moving the ball, so I was getting a lot of open looks," said Bell, who hit seven of nine 3-pointers. "I just focused on my fundamentals and tried to knock them down."

Pistons: Guard Frank Jackson missed the second half with a back injury. Cory Joseph left in the third quarter with a cut eye, but returned for the fourth quarter after receiving stitches.

The Pistons honored Oxford High School at the game, 73 days after the school shooting in which four students were killed. Members of the boys' and girls' basketball teams lined up with the Pistons for the national anthem, which was performed by an Oxford student. The high school is about 40 miles north of Little Caesars Arena, but only a short drive from the Pistons' long-time home -- the Palace of Auburn Hills.