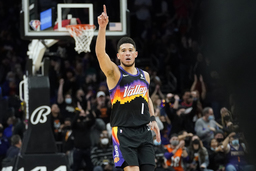 PHOENIX (AP) Chris Paul has been to the All-Star Game 11 times in his NBA career and - barring a mammoth snub - is headed there for No. 12 next month.

Now coach Monty Williams will get to join him for the first time.

Devin Booker scored 28 points, Mikal Bridges added a season-high 26 and the Phoenix Suns overcame a 12-point deficit in the fourth quarter to beat the San Antonio Spurs 115-110 on Sunday night.

The NBA-leading Suns became the first team in the league with 40 wins - against only nine losses. The victory ensured that Phoenix will have the best record in the Western Conference at the All-Star break, which means Williams and his staff get to lead Team LeBron in Cleveland on Feb. 20.

Paul said getting Williams the All-Star head coaching honor has been top of mind for the players over the past week or two.

"Over the course of the long season, there's nothing wrong with having a little benchmark, a little goal," Paul said. "I'm just happy for Monty, happy for our staff. That's cool."

The Spurs took a 91-79 lead into the final quarter, but the Suns erased that advantage in less than 3 1/2 minutes. They used a 14-point run - highlighted by Cam Johnson's powerful one-handed jam - to take a 96-93 lead.

The game stayed tight from that point forward until Booker's two big shots pushed the Suns ahead for good. Booker didn't have a particularly great shooting game until that point, but was clutch when needed.

"I just know he's not afraid to take the shot," Williams said.

Paul had another huge game with 20 points, 19 assists and eight rebounds, just two nights after he had his 18th career triple-double. Bridges shot 11 of 16 from the field.

Williams said he appreciated how his players wanted him to receive the All-Star honor.

"It's a huge blessing to be in this position where you can be the caretaker of an organization and represent the city, the team, your family," Williams said. "I'm mindful of all the sacrifices that people make so I can be in this position. It's a team effort for sure."

"There was nobody that played badly," Spurs coach Gregg Popovich said. "They played together, we were physical, we had great pace. They played with confidence against a hell of a team. Sure, I want fewer mistakes and I want a win, but it is hard to ask for more than what they gave tonight."

In the closing minutes, the Suns had an unfamiliar face on the floor - forward Ish Wainright.

The muscular 6-foot-5, 235-pound rookie finished with a career-high 10 points, including a bucket late in the fourth. He hit two 3-pointers, grabbed two rebounds and blocked two shots. Wainright's received more playing time in recent weeks since the Suns have had several players out with injuries.

"It was fun, real fun," Wainright said. "To have a coach that trusts you every single game, that means a lot."

Wainright has a football frame and played both basketball and football in college at Baylor. He finally broke into the NBA with the Suns this season at 27 years old.

Spurs: Guard Josh Primo, a rookie who recently turned 19 years old, finished with 13 points, which was two from his career high.

Suns: Hosted a sellout crowd at the Footprint Center for an 11th straight game. ... F Bismack Biyombo had his 64th career double-double with 10 points and 11 rebounds. ... G Landry Shamet left the court in the fourth quarter with an apparent ankle injury. He finished with three points in 17 minutes.