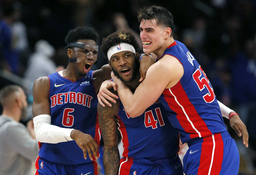 DETROIT (AP) Saddiq Bey hit a 3-pointer with 1.9 seconds left in overtime and finished with 21 points, leading the Detroit Pistons to a 117-116 win over the San Antonio Spurs on Saturday night.

"I caught it and I knew it was good," Bey said of he winning shot.

Hamidou Diallo had 34 points and 13 rebounds to lead Detroit, which had lost four in a row and 18 of its last 19 games. The Pistons had five players score in double figures and three - Diallo (14), Luka Garza (14) and Bey (17) - with double-digit rebounds. Garza scored 20 points, Cassius Stanley added 19 (ppoints and Derrick Walton had 11, both career highs, in the win.

"I was happy for everybody." said Detroit coach Dwain Casey, who had only three other players available from his usual 15-man roster. "Especially the G League guys who came in. It's hard to win in this league with rookies. Then you add G League guys who are fighting and scratching to get in the league, and they had to play in roles they had not done in the G League.

"Without Bryn, we definitely would have lost the game," Spurs coach Gregg Popovich said. "Down the stretch, he was great. We just missed too many free throws when it counted and made some sloppy plays"

The Spurs led by as many as 17 points in the second quarter before the Pistons closed within seven, 59-52, at halftime. Detroit then went on a 33-22 run, taking an 85-81 lead after three quarters.

The Pistons were playing without Frank Jackson, who sustained a right ankle sprain against New York on Wednesday. He was one of 13 inactive players on the Pistons' roster. Ten of the players were out for reasons related to the NBA's COVID-19 health and safety protocols.

"Basketball is a next-man-up game," Forbes said. "You have to give (Detroit) credit. They came back hard and came back fighting. You've got to bury them, (when up by 17) and that's not what we did, and we paid the price."

It was the second game of the week between the teams. The Spurs won 144-109 in San Antonio on Monday. ... The Spurs put Lonnie Walker and Doug Mc Dermott on the inactive list due to COVID-19 protocols.

Spurs: At Toronto on Tuesday.

Pistons: At Milwaukee on Monday.