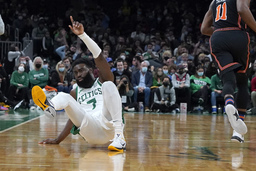 BOSTON (AP) Josh Richardson scored a season-high 27 points, Jayson Tatum had 25 and the Boston Celtics beat the New York Knicks 114-107 on Saturday night with each team missing six players because of COVID-19 protocols.

Jaylen Brown added 23 points for Boston. After blowing a 15-point halftime lead, the Celtics won for just the second time in their last six games.

"Being off mentally for five days was obviously good for me," said Richardson, who was also on COVID protocol this month. "I was pushing myself when I was out. I was thankful to get those negative tests quickly and come back."

Evan Fournier, who played with Boston last season, led the Knicks, matching his season-high with 32 points. New York has lost five of six.

Kemba Walker, who played for Boston the last two seasons, started for the Knicks and scored a season-high 29 points before fouling out. He was benched after starting New York's first 18 games and didn't play in the last 10. Julius Randle added 20 points and seven rebounds.

The Knicks kept it a two-possession game until Robert Williams III had a dunk, making it 109-102 with 3:14 left. Richardson's 3 from the left corner sealed it with 32.6 seconds left.

Trailing by 15 at halftime, the Knicks opened the third with a 23-5 run, and took their first lead of the night on Walker's 3 from the right wing. They led 88-86 entering the fourth.

"We just had a little lapse there and picked it up where we left off in the first half," Celtics coach Ime Udoka said. "A few mistakes there, but overall three great quarters of defense."

Boston starting center Al Horford and forward Grant Williams were sidelined due to health and safety protocols along with four other teammates. Immanuel Quickley and RJ Barrett are in protocol with four other Knicks.

The Celtics, who had little resistance from the Knicks' defense in the opening half, led by 14 after one and pushed it to 62-47 at halftime.

Knicks: G Derrick Rose was sidelined with a right ankle injury he sustained in the last game. . Randle, their leading scorer at 19.6 per game, was scoreless in 10 minutes in the opening quarter. His initial basket came on a 3 midway into the second. . They had a 41-point third quarter. . Fournier played 16 games with the Celtics last season after coming over in a trade from Orlando.

Celtics: G Dennis Schroder was sidelined with a non-COVID-19 illness. . G Romeo Langford was also sidelined with neck pain from a hard foul from Golden State's Andrew Wiggins in Friday's loss. Udoka said he was checked and didn't have a concussion . Signed Justin Jackson to a 10-day contract. The 26-year-old forward played with four NBA teams and was with Texas Legends in the G League.

Boston's Sam Hauser was placed in protocol Friday, forwards Jabari Parker and Juancho Hernangomez landed in earlier in the week, and Brodric Thomas went in on Saturday.

Walker was greeted with a mixture of boos and cheers during pregame introductions. There was a spattering of cheers when he nailed his first basket - a 3-pointer - early in the opening quarter and when he scored throughout.