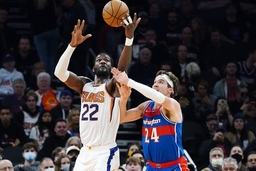 PHOENIX (AP) Chris Paul and Deandre Ayton had a good time in the fourth quarter, celebrating dunks and 3-pointers, high-fiving teammates and generally taking it easy.

The Phoenix Suns have won a lot of games in a lot of ways this season, but blowouts have been few and far between. That changed Thursday night with a 118-98 victory over the Washington Wizards.

McGee scored 17 points and Ayton added 15 as the combo dominated the interior, pushing the Suns to 58 points in the paint. All five starters and eight total players scored in double figures. Landry Shamet had 16 points and made four 3-pointers, and Paul had 12 points and six assists.

The Suns pulled even with Golden State for the NBA lead at 23-5. They have won 22 of 24 games dating to Oct. 27. The way the two teams have won this season is quite different: The Warriors are outscoring teams by nearly 12 points per game while the Suns have about a seven-point margin.

Suns coach Monty Williams said he was particularly impressed with the victory because it came just two days after a physical 111-107 overtime win at Portland. He could sense that his team was a little tired at the morning shootaround, but pushed through any discomfort.

"We were ready," Williams said. "That was pretty cool. The outcome was the residual of the focus and determination we showed on defense, holding that team to 98 points and having eight guys in double figures."

Paul and Ayton didn't have to play at all in the fourth quarter. Only Shamet played more than 30 minutes.

Washington has lost four straight and seven of its last eight to fall to 15-15. Bradley Beal led the Wizards with 26 points on 11-of-18 shooting, but the rest of the team couldn't muster much offense. The Suns had a 47-32 rebounding advantage.

"We are in a rut right now," Wizards forward Montrezl Harrell said. "Nobody is going to feel bad for us, brother. We've got to figure it out."

Said Wizards coach Wes Unseld Jr.: "We competed. We didn't always do things right. Overall, we started the right way. I think it was one of those things, can you sustain it?"

The Suns led for nearly the entire night and had a 62-50 advantage at the break. Ayton had 13 points, eight rebounds and four assists in the first half. Beal led the Wizards with 20 points.

Backup forward Cam Johnson has been crucial for the Suns during All-Star guard Devin Booker's injury absence. Johnson came into Thursday averaging more than 14 points in the six games Booker's missed, which ranks second on the team. Johnson finished with 13 points on 4-of-6 shooting, including 3 of 5 from 3-point range, against the Wizards.

Suns: Booker (left hamstring) missed his seventh straight game. The two-time All-Star has been on the floor some during practice but Williams said there was still no timetable for his return. ... The Suns shot 57% from the field in the first half. ... All five Suns starters had at least 10 points by the end of the third quarter. ... The Suns made 25 of 26 free throws.

Wizards: At Utah on Saturday night.