Graham's 61-footer at the buzzer leads Pelicans past Thunder 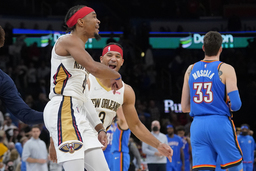 Oklahoma City's Shai Gilgeous-Alexander had just hit an off-balance 30-footer to tie the score with 1.4 seconds remaining. The Pelicans inbounded to Graham, who launched the ball from near the 3-point arc on the other end of the floor to win it.

"I just wanted to get one up, honestly," Graham said. "I didn't want to take the ball out. I waited. Then J-Hart (Josh Hart) passed it to me and I just let it fly."

Brandon Ingram, who led the Pelicans with 34 points, went through a wide range of emotions as the shot went up.

"I thought it was going in," Ingram said. "But when it went in, I was in disbelief."

"I mean, we even told the referees, you know, look, we plan on trying to foul them before they shoot a 3," Green said. "And then he tried to foul him and they didn't call anything, and he had to let him go because he didn't want to give up a four-point play."

Oklahoma City's Kenrich Williams tried to put pressure on Graham's final shot, but he wanted to be careful.

"I just didn't want to foul, make a stupid play," Williams said. "Just tried to show my hands. I knew that he was going to try to shoot that shot. And it went in, man, so you've just got to tip your hat to him."

Jonas Valanciunas added 19 points and 16 rebounds for the Pelicans. Graham finished with 15 points and eight assists.

Gilgeous-Alexander led the Thunder with 33 points. Williams and Josh Giddey each scored 17 points and Mike Muscala added 16 for the Thunder.

Oklahoma City led 102-100 in the fourth quarter before three straight baskets by Ingram put the Pelicans in front.

Gilgeous-Alexander banked in a 3 with 28 seconds remaining to cut New Orleans' lead to 106-105, but Ingram hit a contested mid-range jumper on the other end with 7.2 seconds left to push the Pelicans' lead back up to three.

Ingram was fouled with 4.5 seconds left, and he made two free throws to make it a three-point game, setting up the final sequence.

"I thought we put ourselves in a really good position all things considered, but when you lose a game that tight, it stings," Thunder coach Mark Daigneault said.

Green said the result was an extension of the energy the team has been showing lately.

"Just proud of our guys," he said. "Like, we've been fighting through adversity all season, and this group is having a fun time hanging with each other in practice. The spirit of this team is upbeat, and I'm proud of the way that they continue to fight."

Pelicans: Turned the ball over six times in the first quarter. ... Ingram scored 10 points in the second quarter. ... Graham made 5 of 14 shots overall but 5 of 10 3-pointers.

Thunder: Guard Lu Dort sat out with a sprained left ankle. ... Shot just one free throw in the first half. ... Rookie guard Tre Mann fouled out after a Thunder coaches' challenge took a foul away from Gilgeous-Alexander and transferred it to him. Mann scored nine points in 23 minutes.

Ingram, on whether he had possession of the ball he shot for the game winner: "Somebody needs to get it for me. I know my mama and grandmama want it. Good Christmas present."