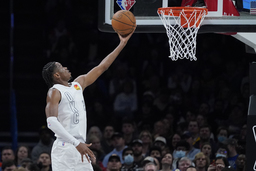 OKLAHOMA CITY (AP) The Los Angeles Lakers were ready for the Thunder this time. Having LeBron James on the court was a big reason why.

James - who sat out the Lakers' first two games against the Thunder this season, both losses - had six assists and five rebounds. Avery Bradley added a season-high 22 points for the Lakers, who moved one game above .500.

"There's teams that we should have beaten that we didn't beat," Lakers center DeAndre Jordan said. "And we don't want to look back in April, whatever it is and, `Oh wow, we could have had home-court advantage. We could have did this, we could have done that if we would have finished a game out an extra eight minutes.'"

Rookie Tre Mann scored a season-high 19 points for Oklahoma City. He brought the crowd to its feet with a powerful right-handed jam over Wayne Ellington seconds after James had dunked on him on the other end.

Mann got a confidence boost matching up against some of the league's best.

"It'll help out a lot going out there and knowing I can go out there and play against the best players. But that was something that I was telling myself before the game, that when I got in, I was going to go in there and try to go at them," Mann said.

Thunder scoring leader Shai Gilgeous-Alexander, who came in averaging 21.9 points per game, finished with 11 points on 5-of-12 shooting.

The Lakers led by 25 points in the second quarter, but the Thunder cut it to 12 before the Lakers re-asserted themselves and led 64-45 at the break. James had 23 points in the first half on 9-for-10 shooting. The Lakers shot 54% from the field and 59% from 3-point range before the break.

"It's not about who's going, it's about the ball finding the open man," Lakers coach Frank Vogel said. "Everybody out there can score, and I try to try to give a message that ... it's going to come down to everyone trusting each other and not worrying about who's performing at a high level on a given night."

Two survivors of the 1921 Tulsa Race Massacre attended their first-ever NBA game. Viola Ford Fletcher, 107, and her brother, Hughes Van Ellis, 100, received a standing ovation from the crowd when they were shown on the big screen.

Lakers star Anthony Davis sat out with a sore left knee. Vogel didn't have many details.

"I don't really know exactly what the next steps are other than the medical team just said we want to find out exactly what it is before we put him out there," Vogel said.

Former University of Oklahoma star Austin Reaves, a rookie, scored a season-high 13 points for the Lakers. He had been hampered by a hamstring issue.

"He's looked like he's still a player coming back from injury in his first couple of games back until tonight," Vogel said. "And I think tonight was what you see with what he's capable of and what he does on both sides of the ball. And you know, that's the performance I was I was looking for from him."

Thunder: Missed all 11 of their 3-point attempts in the first quarter. They made 10 of 44 overall. ... Wore their gray and white City Edition uniforms and played on their alternate court. ... Lu Dort made 4 of 17 shots. ... Rookie Josh Giddey had 12 points, seven rebounds and seven assists.