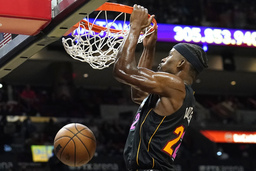 Jimmy Butler scored 32 points and the Miami Heat beat the Washington Wizards 112-97 on Thursday night for their fourth straight victory.

The teams will meet again Saturday night in Washington.

Butler shot 11 of 19 from the field and made all 10 of his free throws in his second consecutive outing over 30 points.

Bam Adebayo returned from a two-game absence because of a bruised left knee and added 20 points, Gabe Vincent had 18 points and P.J. Tucker 15. The Heat improved to 11-5.

Bradley Beal scored 30 points for Washington, and Kyle Kuzma added 19 points. The Wizards have lost two straight to drop to 10-5.

"Everybody had their antennas up when we were No. 1 in the East," Beal said. "The biggest thing I like about our team is our fight. We don't give up."

The Heat made 7 of 8-pointers in the third period to take control. Duncan Robinson's 3-pointer with 3:59 remaining in the quarter gave Miami its largest lead at 75-57. The double-digit result was the ninth in the Heat's 11 wins.

"Look, Washington has really established a way of playing," Miami coach Erik Spoelstra said. "They're a very good defensive team. You have to really be intentional with your offense, you have to do things with pace, your spacing has to be right on and you have to share the ball."

"Obviously, in the third quarter the game got away from us a little bit," Washington coach Wes Unseld Jr. said. "We competed outside that third."

Wizards: Beal also had five assists, including a pass on Montrezl Harrell's first-quarter dunk that for career assist No. 2,500. ... Unseld Jr. was facing Miami for the first time. His father, former Washington Bullets coach Wes Unseld, went 11-15 against the Heat from 1989 through 1994. ... Wizards assistant Pat Delany spent 11 years in the Heat organization, starting in the video room, then scouting and eventually coaching in the G League.

Heat: Markieff Morris (whiplash) missed a sixth consecutive game after taking the Nov. 8 hit from Denver's Nikola Jokic. ... The Heat play their next four games on the road, and 10 of their next 15 over the next month are away from home. ... Including playoffs, Miami's winning percentage against Washington is 69%, which is the best the Heat have against any franchise. Miami has won 66% of its games, against Sacramento.

TWO IN A ROW

Miami has one other stint this season of seeing an opponent in consecutive games, visiting Atlanta on Jan. 12 then playing host to the Hawks two nights later. This is the only such instance of it happening on Washington's schedule this season.