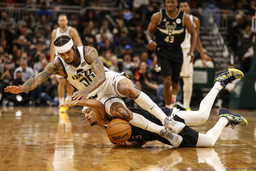 MILWAUKEE (AP) Donovan Mitchell helped the Utah Jazz bounce back from their first loss of the season.

Mitchell scored 28 points and the Jazz beat the short-handed Milwaukee Bucks 107-95 on Sunday to hand the defending NBA champions their third straight loss.

Both teams were playing for the second straight night, as the Bucks fell 102-93 to San Antonio and the Jazz lost 107-99 at Chicago. Utah was undefeated before that trip to Chicago.

"We really executed when we needed to," Mitchell said. "You look at tonight and you look at the way last night went, two polar opposite situations. I think there were times Chicago really amped up the pressure ad we weren't ready for it. (The Bucks) did it again tonight and we were ready for it. They're NBA champions. They're not going to just go down 15 and call it a day."

Milwaukee has dropped three home games over the last five nights and has shot 27.5% (36 of 131) from 3-point range during that stretch. The Bucks opened the home stand with a 113-108 loss to Minnesota.

Khris Middleton missed Sunday's game with an illness, causing one more obstacle for a Milwaukee team that already has been playing without usual starters Jrue Holiday, Brook Lopez and Donte DiVincenzo due to injury. Reserve forward Rodney Hood left with a bruised right hand after playing just 11 minutes.

Bucks coach Mike Budenholzer said after the game that X-rays on Hood's hand were inconclusive.

"We'll get another X-ray, another look at it tomorrow and hope for the best," Budenholzer said.

Utah made its first five 3-point attempts and never trailed all night. Whenever the Bucks tried to rally in the second half, Mitchell responded.

"He's very calm in big moments," said Milwaukee's Grayson Allen, who used to play alongside Mitchell in Utah. "That's just how he is. He's always kind of got a next-play mentality. In Utah, when I was there, something they liked to talk about mentally a lot is your next-play speed. He's very good at that. I think that really helps him down the stretch, too.

"It's just another moment for him. A lot of times , he wants the ball. He wants to be in that moment. He's very calm. He's very relaxed. And he's bee in a ton of those now, ever since his rookie year, he's been making plays like that."

When the Bucks got within five points with less than five minutes left in the third quarter, Mitchell scored Utah's first seven points in a 12-2 run that gave the Jazz some breathing room. Before that stretch, Mitchell hadn't scored since a 10-point first quarter.

After trailing by 17 in the final minute of the third period, Milwaukee got within five again midway through the fourth. Mitchell answered by scoring five points in a 9-1 spurt.

Allen made a 3-pointer to cut Utah's lead to 99-95 with 1:39 left, but Mitchell made the game's next two baskets to seal the victory.

"I think that's really like my job, to kind of go out there and have that imprint, that moment" Mitchell said. "It could have easily went the other way real quick."

The Bucks got 18 points from Allen, 15 from Bobby Portis, 11 from George Hill and 10 from Thanasis Antetokounmpo.

Bucks: Middleton's illness paused his quest to become the most prolific 3-point shooter in Bucks history. Middleton has 1,049 3-pointers since joining the Bucks, two away from Ray Allen's franchise record of 1,051. . Grayson Allen has scored in double figures in seven straight games, a career high.

Bucks: At Detroit on Tuesday. The Bucks have won their last 10 regular-season meetings with the Pistons.