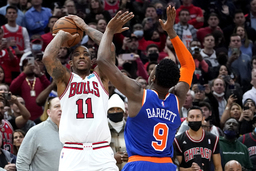 CHICAGO (AP) Kemba Walker scored 21 points, RJ Barrett added 20 and the New York Knicks hung on to hand the Chicago Bulls their first loss of the season, 104-103, on Thursday night.

Julius Randle had 13 points, 16 rebound and nine assists. Derrick Rose came off New York's bench to score 12 points against his former team as the Knicks won their second straight and improved to 4-1.

This one wasn't as easy for New York. It boiled down to a stop of Chicago's DeMar DeRozan as time expired after Bulls went on a 12-0 run in the final minutes to nearly tie the score in a game the Knicks seemingly had wrapped up.

"Right now, we're still getting a feel for each other," New York coach Tom Thibodeau said. "Every game we're getting better and better.

"I love the fact that everyone is sacrificing for the team and putting the team first. That's how you win big in his league."

The Knicks had to settle for a narrow victory.

Chicago star Zach LaVine scored 25 points, despite playing with a torn ligament in his left thumb.

LaVine's dunk with 9.5 seconds left trimmed New York's lead to one point after the Knicks held a 104-91 advantage with 2:59 left. LaVine's thumb was taped up after he was injured Monday in Toronto.

Randle missed a pair of free throws with 4.7 seconds left to give Chicago the final possession, but DeRozan missed a 15-foot, pull-up shot with Barrett helping to cover him.

"Like any team at home, they have their fans and they don't want to lose," Barrett said. "They're undefeated and a good team and they're going to make a push."

Barrett, a 21-year-old Toronto native, had an idea of what DeRozan might try to do. Barrett said he idolized DeRozan, 13-year veteran and four-time All-Star, when DeRozan played for the Raptors.

"He was one of my favorite players and the pride and joy of Toronto," Barrett said. "Thankfully, I was able to stay down and was just able to help"

New York shot 45.9 % and just was a touch quicker and sharper from the floor for most of the game than Chicago, which shot 42.9%. New York pulled ahead by as many as 13 points in the third in a game that went from run-and-gun to deliberate and scrappy.

"It was a good game. It was our first real test and it came down to that last shot," LaVine said. "We fought back. I just wish we got into it a little sooner where we could take a lead."

Immanuel Quickley made a long jumper with 1.3 second left in the first quarter to give New York a 27-25 lead.

The Knicks managed to stay ahead the rest of the way, although the Bulls made charges. When Chicago narrowed the lead - to as little as one point early in the third quarter - New York responded with scoring spurts.

The Knicks had the edge in the second quarter, never lost the lead and were ahead 55-51 at the half. New York outshot Chicago, 53.5% to 51.3% from the floor in a mostly up-tempo opening 24 minutes.

The Bulls narrowed New York's advantage to two points twice in the second quarter, but never caught up. LaVine led all scorers with 17 points in the half.

Patrick Williams narrowed the Knicks' lead to 57-56 with a pair of free throws early in the third quarter. New York responded with a 10-0 run.

The Bulls celebrated the career of former center Joakim Noah and named him a team ambassador on Thursday. The 36-year-old Noah, who retired after five games with the Clippers in 2019-20, got a standing ovation from the crowd during a video tribute in the second quarter.

Noah was Chicago's first-round draft pick (ninth overall) in 2007 and played nine of 13 seasons with Chicago, where he was a two-time All-Star and three-time All-Defensive team selection.

Noah said he misses the NBA, but "feels a lot less anxiety" and sleeps better.

"To be a coach, you have to be a little bit sick," Noah said, "When you're not feeling it, you have to motivate a group of men to get a job done. That's a tough job."

Noah called out Knicks coach Tom Thibodeau, who coached him with the Bulls for five seasons. "He's sick for sure, but I love him," Noah said.

Knicks: C Nerlens Noel, who hasn't played this season because of knee and hamstring injuries, remained out.

Bulls: Coach Billy Donovan acknowledged before the game that LaVine would have to deal with discomfort from his thumb, but the team's medical staff didn't recommend that the All-Star guard sit out. ... LaVine said playing with the injury "wasn't pleasant, but it's doable." He said it limited his ability to dribble and make certain moves. "I've just got to find ways to manage it. It's like a Grade 2 ankle sprain. It's going to takes some time." ... Williams left the game with a wrist injury.