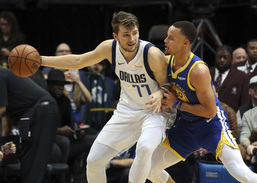 The Golden State Warriors will attempt to reach a high-rent NBA milestone and take a commanding lead in the Western Conference finals when they host Game 2 against the Dallas Mavericks on Friday night.

With their 112-87 romp over the Mavericks in the best-of-seven opener Wednesday, the Warriors moved within one of becoming just the fifth franchise in NBA history to record 200 postseason wins. The Los Angeles Lakers, Boston Celtics, Philadelphia 76ers and San Antonio Spurs currently are the only members of the exclusive 200 Club.

In rolling to a seventh straight triumph at home this postseason, the Warriors dominated the Mavericks in almost every aspect of Game 1, outshooting them 56.1 percent to 36.0 percent overall and 34.5 percent to 22.9 percent on 3-pointers. They also outrebounded the Mavs 51-35.

Andrew Wiggins was the defensive leader with his effort on Mavericks star Luka Doncic, limiting him to a postseason-low 20 points on 6-for-18 shooting. But Warriors coach Steve Kerr doesn't necessarily expect more of the same moving forward.

"He's too good," Kerr said. "One game we did an excellent job defensively, but we are under no illusion that we've figured anything out. There's a good chance those shots start going in next game, so we just have to stay committed and stay aggressive and play with force and see what happens."

The Warriors pulled away through the second half, but most of them pointed to the impact of the game's first 12 minutes. That's when the Mavericks, riding the momentum of a Game 7 win at Phoenix on Sunday, took 19 3-pointers and made just three of them, falling behind 28-18.

"There were a lot of great looks that just didn't go down. It happens. It's basketball," Mavericks coach Jason Kidd said. "Hopefully we get those same looks in Game 2."

Jalen Brunson didn't make any of his five 3-point attempts on the night. Davis Bertans went 0-for-4, and Reggie Bullock misfired on seven of his 10 tries.

But much of the focus in the postgame analysis was on Wiggins limiting Doncic to 3-for-10 on threes.

While the results might not be the same, Wiggins promises his effort will return in Game 2.

"I'm still young. I don't really get too tired," Wiggins said. "I'm locked in. I'm motivated, and when you see it work or I feel like it's helping us play better, it just motivates me to do it more."

Neither coach spoke much about changes one game into the series. The Warriors have won the last 13 series in which they took Game 1 and will stick to what worked to try to keep that streak alive.

Doncic, meanwhile, hopes the Mavericks learned a lesson after rallying to beat Phoenix: Digging a 2-0 hole is not ideal.