Status of Lakers' stars uncertain for matchup with Thunder 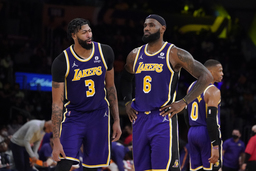 When the Los Angeles Lakers acquired Russell Westbrook over the offseason, the aim was to push them further than last season's first-round playoff exit.

If Westbrook can keep putting together performances like the one he provided Tuesday in a 125-121 overtime win over the host San Antonio Spurs, the plan might prove wildly successful.

The victory was all the more impressive because it came with LeBron James sitting on the bench in street clothes. The star was scratched pregame due to right ankle soreness, and he is considered questionable for the Lakers' Wednesday road game against the Oklahoma City Thunder.

Since James joined Los Angeles in 2018, he has missed more than 25 percent of the Lakers' regular-season games.

The Lakers hope they don't have to play without James much this season, but their first chance without him went well against the Spurs. Anthony Davis scored 35 points and grabbed 17 rebounds, and Westbrook contributed 33 points, 10 rebounds and eight assists.

"Last year we lost LeBron and (Davis) for a long stretch and we didn't have enough to sustain throughout the regular season and to win in the playoffs," Lakers coach Frank Vogel said. "To get a guy like Russ -- if one of those guys is down, we have another guy that can put up a monster night.

Davis was injured late in regulation at San Antonio when he collided with a Spurs player. Even though Davis remained in the game and played all of overtime, he was still noticeably affected by the knee knock.

"We'll just have to see how sore he is," Vogel said. "We'll see how he responds overnight."

Westbrook shot 15 of 27 from the floor and committed just three turnovers against the Spurs. Davis hit 15 of 31 field-goal attempts.

Westbrook spent his first 11 seasons with the Thunder, and his departure after the 2018-19 season kicked off a rebuild for Oklahoma City.

The Thunder have the youngest roster in the NBA, with just two players who have played four full seasons or more.

One of the young players is center Jeremiah Robinson-Earl, who made his first career start Tuesday in the Thunder's 106-98 loss to the visiting Golden State Warriors. He scored 12 points and grabbed five rebounds.

"He's learning," Thunder coach Mark Daigneault said. "He doesn't make the same mistakes twice. He's got a lot of ingredients that are pretty predictive of improvement."

The Thunder are looking to avoid their first 0-5 start since moving to Oklahoma City. The franchise last dropped its first five games in 2007-08, when the club went 0-8 to start its final season in Seattle.

Oklahoma City was in front for much of the Tuesday game before the Warriors outscored the Thunder 33-17 in the third quarter to take the lead for good.

"NBA teams are really good. We already knew that," said Thunder guard Shai Gilgeous-Alexander, who scored a game-high 30 points. "But we've got to play a full 48 if we want to get a W, for sure."

Wednesday's game is the last of a three-game homestand for the Thunder before they head on a three-game West Coast trip that includes games against both the Warriors and the Lakers.