Browns' Watson confident in bounce back after rusty return 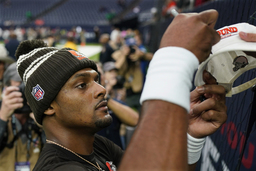 BEREA, Ohio (AP) Deshaun Watson felt the crowd's anger while juggling his own nerves and emotions in a return that was rustier than expected last week.

After a dismal debut for the Browns against Houston in his first game since serving an 11-game NFL suspension over allegations of sexual misconduct levied by two dozen women, Watson expects to play much better on Sunday at Cincinnati.

Cleveland's counting on it.

"I don't know when it's going to come back," Watson said Thursday before practice. "I don't know if it was going to be last week, this week. My job is to just keep getting better and when it clicks, it clicks, and everyone will feel that."

His first outing couldn't have gone much worse. Watson wasn't himself. He wasn't even close.

Facing his former team and some Texans fans who have abandoned him, Watson had one of the worst games of his pro career. He completed 12 of 22 passes for 131 yards, threw an interception in the end zone and finished with a 53.4 passer rating - his lowest in 53 starts.

Watson blamed some of his inaccuracy - he grounded a few passes into the turf - on poor mechanics and intends to use the days leading up to the Browns (5-7) facing the Bengals (8-4) on getting back to fundamentals.

Foot work. Shoulder level. Conditioning. All of it needs attention. And then there's the mental game.

Watson acknowledged that in addition to his 700-day layoff between games, the hype surrounding his return to Houston contributed to him playing so poorly. The intense buildup was followed by boos and cheers in a charged atmosphere inside NRG Stadium.

It was more than he imagined.

"The last week, it was a lot," he said. "The anticipation to be back on the field. The anticipation of going back to my former team, playing against former teammates and being in front of a crowd that used to cheer for me at the time. ... I'm glad that's out the way, I'm glad we got the win. I'm just trying to look forward to this week.

Watson was suspended after he was accused of sexual assault and harassment during massage therapy sessions. He wasn't charged criminally by two grand juries and Watson settled 23 civil lawsuits, with two still active.

Last week, before and after his first game since Jan. 3, 2021, Watson, who had to undergo mandatory therapy during his suspension, declined to answer any non-football questions.

This week, he'll be facing a Bengals team playing as well as any in the league. They beat Patrick Mahomes and the Kansas City Chiefs for the third straight time last week and are looking to avenge an embarrassing 32-13 loss to the Browns on Halloween.

Cleveland's playoff hopes are thin, but a win over the defending AFC champion Bengals could provide a major lift and keep the possibility of putting together a winning streak to make the postseason alive.

It all hinges on how Watson plays.

And while it may be unrealistic to expect Watson to play like a three-time Pro Bowler right away, Browns wide receiver Amari Cooper doesn't think his teammate is being asked to do anything he can't handle.

"He's a professional quarterback who's played at the highest level," Cooper said. "It's just rhythm and timing, and once it comes, it's gonna be there. "

The Browns bailed Watson out last week by scoring two defensive touchdowns and returning a punt for a score against the hapless, one-win Texans. That was a gift. Cincinnati won't be as giving.

It's imperative for Watson to work out any kinks with coach Kevin Stefanski's play-calling and troubleshoot issues with his receivers long before taking the field. The Browns had counted on his reps from training camp and practices over the past few weeks to carry over into games.

That didn't happen in his first game with Cleveland and it could take several more weeks before it does - if it does.

The Browns invested $230 million in Watson to be their franchise quarterback, and they may be facing the possibility he may not look like one until next season.

Offensive coordinator Alex Van Pelt's said his confidence in Watson is rooted in the QB's resume.

"We have seen it prior," he said. "His past history would say that he's lot of those things that you didn't see. He is those things. Those will come back as we get more reps and more game experience with him.

"It was kind of what we expected with some rust there, and that is real. Again, just the work he has put in this week to improve those areas has already shown up."