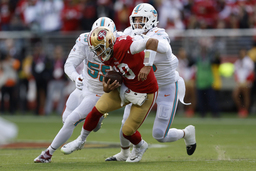 SANTA CLARA, Calif. (AP) The San Francisco 49ers are not counting on getting quarterback Jimmy Garoppolo back for a possible playoff run even after getting the favorable news that he wouldn't require surgery on his broken left foot.

"There's that way outside chance late in the playoffs or something like that," coach Kyle Shanahan said Wednesday. "But it's just an outside chance. I'm not really real optimistic about that. But they didn't rule it out."

Garoppolo broke his foot in the first quarter on Sunday against the Miami Dolphins and the original fear was that he had a Lisfranc injury that would require surgery and could sideline him for several months.

Additional tests ruled that out and revealed no ligament damage, making the timeline for Garoppolo to heal about seven to eight weeks.

While that would have him healed by the second or third weekend of the playoffs, Shanahan said it would take longer until he was ready to play quarterback again.

"I know it's a serious injury that will likely keep him out for the year," he said. "It's really good news that there's no ligament damage or anything so he'll be fine once the broken bone heals."

Garoppolo's teammates were pleased to hear the injury wasn't as serious and that Garoppolo would not have to undergo another offseason of rehab like he did in 2019 following knee surgery and this past year after shoulder surgery.

The first-place Niners (8-4) are forging ahead with seventh-round rookie Brock Purdy at quarterback.

Purdy fared well in his first extensive action in relief of Garoppolo on Sunday, throwing two TD passes, and has impressed the team since arriving as the last pick in the draft in the offseason.

"We're trying not to make a drastic change," Shanahan said. "They have a similar skill set. We got a lot of confidence in Brock. We've seen him in practice. That's why we were confident enough. He hasn't played a ton football, so there is some unknown out there. But we know he's got the ability to do it. We know he's got the mentality to do it."