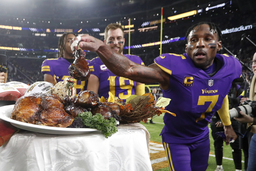 The Minnesota Vikings cornerback - who played his first 10 seasons with the Arizona Cardinals - said on his "All Things Covered" podcast that "Kyler Murray don't care about nobody but Kyler Murray."

The Cardinals quarterback took to social media to fire back at Peterson, saying "if you really felt like this as a "big bro" or "mentor" you supposed to call me and tell me, not drag me so your podcast can grow."

Peterson and Murray were teammates during the 2019 and 2020 seasons, which were Murray's first two in the NFL. Peterson - who was a three-time All-Pro during his time with the Cardinals - has been openly critical of his former organization after he felt slighted during free agency, which led him to signing with Minnesota.

The Vikings beat the Cardinals 34-26 back in October, which Peterson relished.

"I've been told a lot of things about me from that organization," Peterson said after the game. "I got fan mails from the owner, saying I can't tackle. I'm old. I lost it. So, I wanted to go show them that."

Murray was the No. 1 overall pick out of Oklahoma in 2019 and had a successful first three seasons. He was named the NFL's Offensive Rookie of the Year and then was a Pro Bowl selection in each of the past two years. The Cardinals improved during that span and made the playoffs last season for the first time since 2015.

Year 4 has not been as good for the young quarterback.

Murray and the Cardinals fell to 4-8 on Sunday with a last-minute loss to the Los Angeles Chargers. The Vikings are one of the best teams in the NFL with a 9-2 record.

Murray signed a $230.5 million, five-year deal in July that keeps him with the franchise through 2028, making him one of the league's highest-paid quarterbacks at $46.1 million per season. That move was met with some controversy after it was found the contract included an "independent study" addendum which required four hours of study on game weeks, which is a rare request.

The Cardinals removed the addendum a few days later, but the damage to Murray's reputation was largely done.