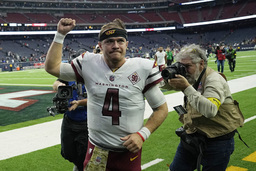 ASHBURN, Va. (AP) Taylor Heinicke is 4-1 since taking over for Carson Wentz as the Washington Commanders' starting quarterback.

He has four new pairs of sneakers to show for it.

In a tradition he began last year, Heinicke gets himself a pair of Air Jordans in the colors of every team he and the Commanders beat. Their success and Heinicke's popularity among players and fans has made the "Js" a viral sensation well beyond the locker room.

"I never really meant it to get this big, but I am enjoying it now," Heinicke said Wednesday. "It's a cool deal, and I think the coolest part about it is it doesn't take away from football. It's very football-related and it's kind of just a little present for us winning."

Heinicke has taken to getting shoes for teammates to thank them for their contributions - and hopes that incentive perhaps "gets those guys going a little bit more." The starting offensive line was first. Tight ends are next.

"It's awesome," right tackle Sam Cosmi said. "I love sneakers. Any time I can get some free shoes that are styling, I'm all for it. I really appreciate it. It means a lot. He really doesn't have to do it, but it just shows what type of team player and what type of quarterback we have."

The quarterback the Commanders have seems like the closest thing to a regular guy holding a starting job in the NFL. Heinicke celebrated an upset of the previously unbeaten Philadelphia Eagles by drinking a few Busch Lights. His personality off the field and all-out play on it have endeared him to fellow players and even coaches.

Old-school coach Ron Rivera even broke out his own pair of Air Jordans last week and sported a Heinicke T-shirt to get in on the bit. He joked the sneaker gift is "better than beer" and is enjoying Heinicke getting some time in the limelight.

"It's kind of Taylor's shtick right now," Rivera said. "It's kind of cool, it really is. His teammates responded. It's kind of funny because some of the defensive guys were screaming at him, 'Hey, why don't you get us a couple?'"

Heinicke isn't among the team's highest-paid players and is two years removed from being out of the league and taking online college classes before Washington called on him to be its quarantine quarterback. His play, while unorthodox, is getting results and should land him a nice contract for next season, with the Commanders or elsewhere.

For now, he's focused on making a playoff run. And he doesn't think about which sneakers he'll get until after a game is in the win column, "usually when I get on the bus at away games or in the parking lot after the game at home games.

"It's bad juju if I look at it before the game."

His favorite so far? The most recent pair in the red, white and blue of the Houston Texans, whom the Commanders beat to improve to 6-5.

"I've been looking at those for a long time and was too scared to pull the pin," he said. "After that win, I felt like it was necessary."

His teammates are appreciating being along for the ride and seeing what pair he gets next. If Heinicke can get the Commanders into the playoffs, his closet will be full.

"Why not spoil yourself after a win?" running back Antonio Gibson said. "And why not get it (designed) after the team you beat? I don't think anybody should dislike that."