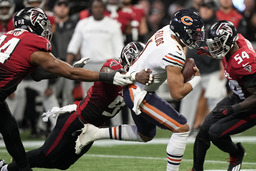 ATLANTA (AP) Quarterback Justin Fields hurt his left shoulder on the final series in Chicago's 27-24 loss to the Atlanta Falcons on Sunday, leaving his status uncertain for the Bears' next game.

Fields had X-rays on the shoulder before opening his postgame news conference by saying "I'm hurting a little bit." He was awaiting results and said he couldn't speculate on his status for Chicago's game at the New York Jets next week.

Fields said he was hurt on the first play of the Bears' possession following Koo's go-ahead field goal. Fields remained in the game.

"I don't know what happened, to be honest with you," Fields said. "I just landed on it, I think. ... I was hurting, but it was the last drive of the game. I tried to be there for my teammates."

Bears coach Matt Eberflus said he expects to have an update on Fields on Wednesday.

Fields ran for 85 yards with a touchdown on a game-leading 18 carries. He completed 14 of 21 passes for 153 yards with one touchdown and one interception.

Fields ran for a combined 325 yards in his last two games, setting an NFL record for quarterbacks in a two-game span. He ran for 178 yards against Miami on Nov. 6 and added 147 in last week's 31-30 loss to Detroit.

Fields said he battled cramping against the Falcons before hurting his shoulder and was given an IV after the game.