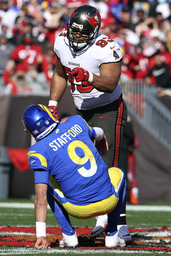 The Eagles and Suh agreed on a one-year contract on Thursday, according to the person who spoke on condition of anonymity because the team hasn't announced the signing. Nuh bolsters a defensive line that also added veteran Linval Joseph this week.

Suh posted an emoji of an eagle on Twitter.

The Eagles (8-1) are shoring up their run defense after giving up 152 yards on the ground to the Washington Commanders in their first loss of the season on Monday. They have the 20th-ranked rush defense and are 25th in yards per carry allowed at 4.7.

The 35-year-old Suh spent the previous three seasons with the Buccaneers and had six sacks last season. He helped Tampa Bay win the Super Bowl following the 2020 season.