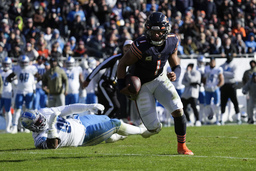 LAKE FOREST, Ill. (AP) The Chicago Bears running game had been rolling along at a record pace despite seven losses in eight games, largely because of quarterback Justin Fields.

Now a hip injury to running back Khalil Herbert threatens to disrupt their offensive success and it could be on Fields to find a way to maintain momentum.

"I think we've done that over the past few weeks, but the main thing is when we get those opportunities at the end of a game, just to finish those off," Fields said. "Those two-minute drives, coach (Matt Eberflus) pulled up a stat today that we are the best team in the league when it comes to those end-of-half, two-minutes drives, on offense and defense.

"So, we just want to translate that to the end of the game."

It could be more difficult without Herbert, who has been an ideal complement as David Montgomery's backup running back. He splits carries and averages 5.95 yards per run, third among NFL running backs.

Rookie Trestan Ebner will get carries this week in place of Herbert when the Bears go on the road to face the Atlanta Falcons, who have league's second-leading running attack.

"I think if I can just get around the edge more this game and hit the edge, I think I can make some big plays this week."

Fields is convinced Ebner can make a difference, depending on a few details.

"I think the biggest thing with him is him learning our plays, the motion shifts because our plays are wordy," Fields said. "So him just kind of digesting that as a rookie coming in and in (pass) protection, too, knowing where he has to go."

The Bears have run for 2,017 yards, the second most in their history for a season's first 10 games since the merger in 1970. The only Bears team to rush for more was the 1977 version with Walter Payton leading the way to a rushing title and the playoffs.

If the success continues, it's largely going to be a result of Fields' efforts. After their Week 6 loss to the Washington Commanders, offensive coordinator Luke Getsy made changes to the approach and Fields' production took off.

Fields has 555 yards rushing in the past five games, most by a QB in the Super Bowl era for a five-game span. He is going for his third straight 100-yard rushing game.

"I would say it's pretty amazing," Eberflus said. "The numbers and the ability to run, and then see his growth in the passing game."

The passing game hasn't opened up overall as the Bears rank last in passing, although Cole Kmet and Darnell Mooney have started to get open more. Kmet has five TD catches in three weeks.

What Fields has done is avoid interceptions, with just three over the past seven games.

"It really helps our running game," Eberflus said of the efficient passing. "It helps the runners; certainly opens up a lot of windows in there in the run game as well. Certainly exciting."

Whether it's planned runs such as last week's 67-yard TD or a scramble such as the 61-yarder against Miami a week earlier, Fields is rolling up chunks of yards.

He also might be wearing himself down. Fields complained about sore legs after Sunday's game, and by Wednesday thought they'd improved somewhat.

"Yeah, I don't even know if it was the hits; it's just the running," Fields said. "My legs just felt heavy after the game.

"The guys on the strength staff said that my load has been pretty high, so just been doing a little bit of tapering back this week in practice."