Turning to Pickett was inevitable for struggling Steelers 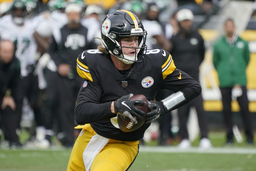 PITTSBURGH (AP) Mike Tomlin tried to keep the moment at bay as long as he could.

Mitch Trubisky did too while gamely - if futilely - enduring what quickly became a weekly referendum on his ability to hang onto the starting quarterback job in Pittsburgh during a slow start.

It didn't matter. Kenny Pickett's ascension was always going to be inevitable.

The moment Pickett's name escaped Hall of Fame running back Franco Harris' lips deep inside a Las Vegas casino near the end of the first round of the draft last April, Trubisky's time atop the depth chart was already on the clock.

The clock hit zero at halftime on Sunday of what eventually became a 24-20 loss to the New York Jets, moments after a play served as a microcosm of Trubisky's likely short and largely ineffectual tenure: a desperation heave toward the end zone that was picked off, a throw Trubisky made while getting drilled late by New York's Carl Lawson. Trubisky managed to get up in time to push Jets defensive back D.J. Reed out of bounds following a Keystone Kops return that ultimately didn't count.

When the second half started, Trubisky was on the sideline in a baseball cap while Pickett ran onto the same field that served as his launching pad to stardom last fall while re-writing most of the University of Pittsburgh record book.

Tomlin says he turned to Pickett looking for a spark. What he actually did was irretrievably shift the tectonic plates in the locker room away from a player selected as the captain of the present just a month ago to the player tabbed to serve as the face of the franchise for the foreseeable future.

Though Tomlin declined to announce a starter for Sunday's visit to Buffalo, Pickett did provide the Steelers with an edge they've lacked for most of their 1-3 start, an edge that Trubisky for all his good intentions failed to provide.

There were mistakes to be sure. Each of Pickett's three incompletions actually ended up in the hands of Jets players (two of which were effectively jump balls in which the intended receiver lost the fight for the ball, the other a chuck to the end zone on the final snap).

Yet he also looked unafraid to take chances, a mindset Trubisky would not or could not embrace, perhaps because he was told by Tomlin and offensive coordinator Matt Canada he won the job because he made good (read: safe) decisions during training camp.

Well, camp is now a memory. So, it seems is the internal notion the Steelers are a legitimate contender in 2022.

To be very clear, their issues extend far beyond quarterback play. The defense has yielded late in all four games, the latest pratfall coming while letting Zach Wilson rally the Jets from a 10-point fourth-quarter deficit in a city in which New York had won just once in franchise history before Sunday.

"Good, bad or indifferent, there's always going to be a spotlight on the quarterback position," defensive tackle Cam Heyward said, later adding, "(but) I think everybody can look at it and say `1-53, we all have to be better.'"

True, but Tomlin's decision left no doubt as to who No. 1 is now, for better or worse.

The running game. Kind of anyway. The Steelers have steadily increased their rushing total through the first four games, from 75 to 91 to 104 to 119 against the Jets. Undrafted rookie free agent Jaylen Warren is averaging a solid 5.0 yards per carry while spelling Najee Harris, but he needs to learn to hold onto the ball.

For a team built to win with little margin for error, the special teams have failed to be a difference-maker outside of kicker Chris Boswell, who tied a career-high with a 59-yard field goal on Sunday. Gunner Olczewski doesn't have a kick return of any variety longer than 20 yards and has already fumbled twice.

The George Pickens of training camp has returned. The rookie wide receiver caught six passes for 102 yards on Sunday, looking every bit the big-play threat the Steelers envisioned when they selected him in the second round.

The next challenge? Getting him in the end zone. Pickens has yet to score a touchdown a month into his pro career.

While Pickens is surging, Diontae Johnson and Chase Claypool appear to be receding.

Claypool was held without a catch for just the second time in his three-year career and failed to break up a heave on a 50/50 ball from Pickett that turned into an interception. Johnson let a Trubisky pass smack off his hands for a pick in the first half that set up a Jets field goal a week after a couple of drops down the stretch in Cleveland proved costly.

Heyward was checked for both ankle and elbow injuries but remained in the game, though he was slowed at times. ... S Minkah Fitzpatrick tweaked his knee but stayed on the field. ... S Terrell Edmunds entered the concussion protocol when he was shaken up trying to break up a pass late in the first half and did not return. ... CB Cam Sutton is dealing with a hamstring issue.

Finding a way to fix a defense that is wilting late in games, and do it while traveling to visit the Bills without All-Pro outside linebacker T.J. Watt, who will miss at least one more game while on injured reserve recovering from a left pectoral issue.