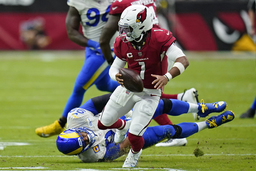 THOUSAND OAKS, Calif. (AP) As the Los Angeles Rams prepare to play the San Francisco 49ers for the fourth time in less than a year, it might be easy to think there is nothing left for defensive tackle Aaron Donald to learn about his team's Bay Area nemesis.

"Well, it's different this year 'cause they got pretty much a new offensive line, so it's a lot more studying for me, trying to see how they play," Donald said Friday.

While the faces lined up across from Donald on Monday night will look different because of roster turnover and injuries, the game plan they will try to execute will be all too familiar.

The Rams (2-1) allowed 291 yards rushing on 75 carries last year in two regular-season losses to the 49ers (1-2), giving quarterback Jimmy Garoppolo opportunities to spread the ball around to his receivers.

But Los Angeles shut down that formula in the NFC championship game, limiting San Francisco to 50 yards on 20 attempts and turning up the pressure on Garoppolo, who was 16 of 30 passing for 232 yards and two touchdowns with one interception.

Defensive coordinator Raheem Morris believes the two defeats were "learning lessons" that helped build the approach needed for the Rams to secure a spot in the Super Bowl.

There were other indicators that showed how well the defense performed. The Rams held the 49ers to 3 of 9 (33%) on third down, and the pass rush consistently made things difficult for Garoppolo despite not sacking him.

Donald said keeping Garoppolo from getting into a rhythm is critical to picking up where the Rams left off in January.

"Our job is just to find a way to get him down or affect him, make him uncomfortable. Try to make him have a bad day. That's why we out there," Donald said. "We don't want him to be able to step up in the pocket. We want him to be antsy, uncomfortable, and if we do that we can have a good day."

Los Angeles showed signs of being that caliber of defense again in its 20-12 win at Arizona on Sunday, keeping the Cardinals out of the end zone and holding Kyler Murray to 5.4 yards per pass attempt. That performance came with rookie cornerback Deion Kendrick making his first career start and other inexperienced players getting extensive snaps in the secondary.

If the defensive backs can continue playing well, especially against the screens and short throws intended to prevent Donald and the front from creating pressure, it should tilt the balance in favor of the pass rush.

Donald did his part against Arizona, getting his 100th career sack to join a small group of interior linemen to reach the mark. He has picked up 3 1/2 sacks against Garoppolo, but none have come in the past three meetings.

San Francisco has won six straight regular-season games in the series, and that is the streak Donald feels more urgency to end.

"Obviously it's a blessing to accomplish great things, but just playing the game and just doing my job and I'm trying to find ways to be successful and help my team to win," he said.