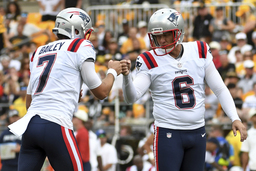 FOXBOROUGH, Mass. (AP) New England Patriots kicker Nick Folk made a 35-yard field goal in the second quarter of Sunday's game against the Baltimore Ravens that was his 57th in a row from inside 50 yards - an NFL record.

Folk hasn't missed from inside 50 since the 2020 season opener against Miami.

The kick cut the Baltimore lead to 7-3 and broke the record that Ryan Succop set with Tennessee from 2014-17.

Folk made one of two field-goal attempts in the first two games, missing from 52 yards against Pittsburgh last week.