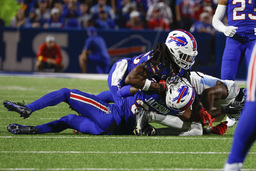 ORCHARD PARK, N.Y. (AP) The Buffalo Bills will be missing four defensive regulars - and potentially more - for their AFC East showdown at the Miami Dolphins on Sunday.

Safety Micah Hyde, cornerback Dane Jackson, tackle Ed Oliver - all starters - and backup tackle Jordan Phillips were ruled out from playing Friday. In the meantime, starting safety Jordan Poyer and tackle Tim Settle are among five players listed as questionable after practicing on a limited basis.

The Bills (2-0) will most certainly be thin in their secondary even if Poyer (foot) is available. Rookie cornerbacks Christian Benford and Kaiir Elam are now in line to start against a Tua Tagovailoa-led Dolphins offense which leads the NFL through two games with 703 yards passing. Benford and Elam opened the season sharing snaps at the the cornerback spot opposite Jackson.

Jackson, who opened the season starting in place of Tre'Davious White (left knee), did not practice this week. The third-year player was briefly hospitalized on Monday night when his neck snapped back when being hit by a teammate in a 41-7 win over Tennessee.

Miami (2-0) is coming off a 42-38 win over Baltimore in which Tagovailoa threw for career-bests with 469 yards and six touchdowns in rallying the Dolphins from a 21-point fourth-quarter deficit.

Hyde and Poyer represent one of the NFL's top safety tandems since arriving in Buffalo together in 2017. Poyer has an interception in each of Buffalo's first two games this season, while the two led the team with five interceptions each last year.

Phillips started against the Titans in place of Oliver, who will miss his second straight game after twisting his ankle in a season-opening 31-10 win over the Los Angeles Rams.