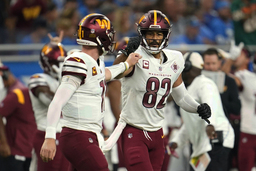 LANDOVER, Md. (AP) Jalen Hurts is in a far different place as an NFL quarterback since a rocky rookie year in 2020 when he usurped Carson Wentz as Philadelphia's starter.

Wentz is geographically and professionally in a different place after trades to Indianapolis and then Washington.

Neither is a fan of dwelling on their season together, Wentz's departure or how Hurts became the face of the Eagles that his old teammate used to be.

Still, when they face off Sunday for the first time with Philadelphia looking to stay unbeaten and the Commanders still trying to get a foothold with their new QB, it'll be a measurement of how far they've come and another barometer for the Eagles' choice of Hurts over Wentz.

Hurts is coming off becoming the first player in league history to throw for 300-plus yards, complete more than 80% of his passes and run for two or more touchdowns in a game. It raised the question of just how high his ceiling can be as a pro.

"I knew he had that in him and again I'm not surprised by anything that Jalen does on the football field," coach Nick Sirianni said Wednesday. "Maybe to the outside world, it's like, `Whoa.' I don't think that surprises any of us in the building because we live with him every day, we see him every day and we see the growth every day."

Wentz is still growing in his seventh season, especially considering he's on his third team in as many years and has had to handle going from getting picked second in the draft in 2016 to criticized and jostled around the league. While saying he doesn't "put a lot of stock into" facing Hurts and the Eagles with new faces and a new coaching staff, facing Philadelphia for the first time is an opportune time for the 29-year-old to take stock of how he got here.

"My career has been a whirlwind," Wentz said. "A lot of really good memories from my time there, I'm not going to lie: a lot of great friends, a lot of great relationships that I made. Definitely will have some mixed emotions in terms of those things, but nothing crazy jumps out other than my time there was a whirlwind."

Hurts knows all about whirlwind journeys after going from being named SEC freshman of the year at Alabama to getting benched for Tua Tagovailoa and then transferring to Oklahoma before he was taken in the second round of the draft in 2020. Only Tagovailoa, now with Miami, has more total yards through two games among QBs, but Hurts has learned not to soak in the highs or the lows too much - or doubt himself at all.

"I never put a ceiling on myself, and I've always felt that way," Hurts said. "Nothing changes. I just take it day by day. I try and climb every day, I learn from my mistakes and just keep pushing forward."

Hurts in 2022 is such a dual threat Washington coach Ron Rivera quipped, "Every time he has the ball in his hands, it's a run-pass option." He stressed discipline among defenders as the way to contain him.

Fortunately for the Commanders, they have two players very familiar with Hurts in former Alabama defensive linemen Jonathan Allen and Daron Payne. Like Sirianni, they're not surprised by anything Hurts is doing.

"We had to practice against him," Payne said. "We had to get yelled at by Coach (Nick) Saban for containing him all the time, so I knew he was capable of doing all these things."

What exactly are the Eagles capable of with Hurts leading the league's top offense? That remains to be seen.

Eagles-Commanders on Sunday is the first NFC East game of the season, with the Cowboys visiting the Giants on Monday night. More so than winning it for Wentz, his Washington teammates understand the importance of not falling behind in the division race.

"We have aspirations of trying to win our division this year, and I think that starts with this game," top receiver Terry McLaurin said. "They're a really good team, and it's going to take a four-quarter effort for us to be able to try to have a chance to do that."

Aspirations or not, the Eagles are actually heavy favorites to win the NFC East on FanDuel Sportsbook. The Commanders have the longest odds.

Philadelphia leads the league with 28 "explosive plays" - completions of 16 or more yards and runs of 10 or more. Washington gave up six such plays in a 36-27 loss at the Detroit Lions to drop to 1-1.

The Eagles can point to Hurts, running back Miles Sanders and receivers A.J. Brown and DeVonta Smith as the reasons for that success. The Commanders don't have one flaw that's causing them to give up yards in big chunks.

"It's a combination," Rivera said. "You want to make sure those things get corrected and addressed."

If recent history is any indication, there could be as many Philly fans as Washington fans at FedEx Field. The Commanders' season opener against Jacksonville had the lowest attendance of any game through the first two weeks, and Eagles fans show up in droves.

"We'll find out," Wentz said. "I'm sure the Eagles fans will travel well, like they always do, but hopefully we're still dominating the stands there. Either way, it'll be fun."