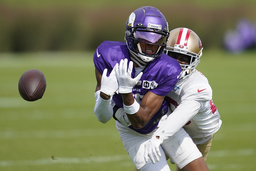 Players and staff from the Marshall Tigers football team - the team Lance led as a prep star just five years ago - attended the joint 49ers-Vikings practice Thursday, with more than 100 guests from his hometown flanking the practice fields in orange and black T-shirts.

"The kids are all wearing Marshall today, but they all have their Trey Lance jerseys in their bag ready to go," said Tigers head coach Terry Bahlmann, whose son played baseball with Lance in the backyard, the two families living a block apart.

The Vikings covered the team's 150-mile ride from the prairie town of 13,000 people to the team's sprawling suburban headquarters, where Lance and the 49ers worked out against the Vikings for a second straight day. The third overall selection in the 2021 draft picked up the tab for all of their meals.

Bahlmann also wanted to make sure his team didn't skip a practice, so the Vikings helped arrange for the Tigers to use the fields at nearby Eagan High School before returning home.

Lance became a quarterback in eighth grade when the Tigers needed a backup, and that's where this journey began in earnest.

"When Trey wants to do something, he puts his mind to it," Bahlmann said.

After taking Marshall to the Class 4A state tournament, Lance had FBS schools considering him at safety or linebacker. Adamant about remaining a quarterback, he picked FCS power North Dakota State. Lance had only one full season as the starter there, because the pandemic wiped out the 2020 schedule, but his big arm and fast feet were too appealing for the 49ers to pass up.

Lance's rise to second-year starter on a confident, talented 49ers team that finished a few points short of the Super Bowl last season came full circle this week with his old high school watching him throw passes across the field for his current NFL team.

"That was always the dream, but it happened fast," Lance said.

After Jimmy Garoppolo helped guide the 49ers to the NFC championship game, where they led the Super Bowl champion Rams midway through the fourth quarter, the decision was made to move on from the nine-year veteran and turn over the offense to Lance.

In the preseason opener against Green Bay, Lance finished one of his two series with a 76-yard touchdown pass. He is not expected to play Saturday against the Vikings.

"Things have slowed down a lot, both mentally and physically," Lance said. "I feel like I'm in a much better spot at both ends."

The 49ers have repeatedly expressed faith in his ability to handle the job despite the little experience.

"I've seen him continually make strides every day," left tackle Trent Williams said. "I've seen him poised in the pocket, getting through his reads, not getting chatter feet and just looking for somewhere to run. That's all we can ask for. He's going to continue to improve, and we've got a ton of confidence in the kid."

The Vikings gave Lance and his offensive line plenty of valuable practice, particularly facing outside linebackers Danielle Hunter and Za'Darius Smith. Williams has been an offseason training partner with Hunter for several years, and the nine-time Pro Bowl pick shared with reporters an amusing perspective on their relationship.

In head-to-head matchups in 2016 and 2017 while Williams played for Washington, Hunter used some of Williams' tips against him.

"We used to get together after a workout, and I would kind of go through what we think on this side and what he should be thinking and he gave me those same type of jewels," Williams said with a smile. "I kind of regret doing that sometimes, but he's a great friend of mine. He's an outstanding player. He definitely makes us better."