Where's Parsons? Opponents will be looking for Cowboys' star 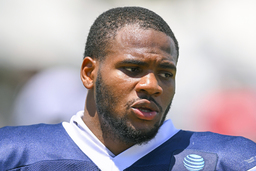 OXNARD, Calif. (AP) Micah Parsons might not lobby for playing time in the preseason this month the way the Dallas linebacker did last year in one of the "Hard Knocks" highlights for the Dallas Cowboys.

The reigning NFL Defensive Rookie of the Year wants to be clear. Parsons still wants to play in preseason games, even though there's a decent chance he won't because of how the Cowboys set up their training camp schedule in California.

"I don't care what game it is, I'm going to try to win," Parsons said. "If you don't have that competitiveness, I wouldn't want to play with you. I even get mad at my sister when we play Scrabble."

The question is no longer whether Parsons is playing. That was answered in a 13-sack season that was among the best for a rookie at his position in NFL history. The question now is where the first-round pick from a year ago will play.

After the addition of free agent linebacker Anthony Barr a week into camp, there's even more talk of "hand in the ground" Parsons - meaning the three-point stance of an outside pass rusher.

The same conversation started early last season, after defensive end DeMarcus Lawrence broke his foot in practice the week after the opener.

By then, Parsons had already shown versatility with his knack for getting to quarterbacks. He played almost exclusively on the line in just his second game - a victory at the Los Angeles Chargers that started a six-game winning streak.

Now he has something of a traveling companion on work days. Linebackers coach Scott McCurley goes with Parsons when he meets with the defensive line group.

"It's something the more you can keep him involved, the better he is in that setting," McCurley said. "He's a natural competitor by heart. I think the meeting room is kind of the same way, in staying involved in everything that's going on."

Ask Dan Quinn about Parsons spending time in both meeting rooms, and the defensive coordinator doesn't need long to remember that his young star believes there isn't much he can't do.

"That's a good question because he does spend time in different rooms and different spots, to go from D-line, LB some," Quinn said, trying to keep a straight face. "I'm sure you probably heard he's working with the running backs ... wide receivers, kicking."

Quinn finally cracked a smile, but there was a serious side to the answer.

"What's unique about Micah is the way we can align him in different spots where he's counted as a down guy, an off-the-ball guy, so I think that's important to say, `Where's the alignment in how we would deploy him from there?'" Quinn said. "Because certainly they value his rush ability and his speed, but we want to make sure we're not just putting him into one spot."

Parsons' value as a pass rusher probably went up when defensive end Randy Gregory switched to Denver in free agency after agreeing to a contract to return to the Cowboys. The signing of Barr was the next step - an important piece for depth at the position Parsons vacates when he joins the defensive front.

They will be looking for him, which is something his coaching staff knows. McCurley said Parsons' competitive nature works in his favor in trying to improve on such a remarkable debut.

"That's a starting point that he's going to continue to grow off of, once he gets on the field, he comes alive," McCurley said. "Aside from that, he just needs to understand that there's still going to be bumps in the road."

Besides believing he can play several positions in football, Parsons fancies himself a multisport athlete. Cornerback Jourdan Lewis, a basketball enthusiast, chuckles at Parsons' eagerness to challenge on the hardwood.

Parsons will concede on one sport, though.

Still, he never said he wasn't up to a challenge.

"He'd flip a coin for us right here to see who gets this white line first," Jones said of the current CBS analyst, pointing at the tennis court near the club's training camp practice fields in Oxnard, California.

"He just came looking for gaming and competitiveness. And Tony was competitive in every way, physically and otherwise."

Careful, Jerry. Parsons might decide he can be a TV star, too.