Chubb healthy at last as he enters crucial season in Denver 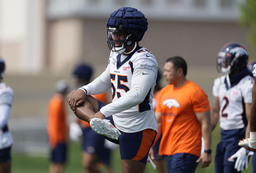 ENGLEWOOD, Colo. (AP) A smile has replaced the scowl on Bradley Chubb's face, and that cheer has spread through the Denver Broncos' defense and front office.

The team's star-crossed pass rusher is coming off his first fully healthy offseason since his rookie year - when he had a career-best 12 sacks - as he attempts to revive a career that features more missed games (25) than sacks (20+).

Chubb is entering the final year of his contract but said his focus on his physical and mental well-being.

"I just want to finish this season healthy. I want to provide as much as I can for this team," said Chubb, who has been limited to 41 games in four seasons since the Broncos picked him at No. 5 in the 2018 NFL draft.

Chubb had a difficult 2021 after coming back from a torn ACL in 2019 to earn a Pro Bowl berth. He needed surgeries on both ankles to remove bone spurs, got into several scrapes with teammate Garett Bolles in training camp and ultimately missed half the season.

In the seven games he did play, he didn't have a single sack.

Right behind solving the team's long-simmering quarterback question this offseason, GM George Paton set out to bolster Denver's pass rush. He lured Randy Gregory from Dallas with a five-year, $70 million contract and drafted Oklahoma linebacker Nik Bonitto in the second round.

Throw in a healthy Chubb and defensive coordinator Ejiro Evero should get pressure with four-man fronts that will allow him to disguise coverages and keep offenses off-balance.

Chubb is having the kind of camp Von Miller used to in Denver, disrupting the offense on a daily basis.

"He's in a really good place," Evero said. "I think he had a great offseason. He's in really good shape. He's feeling healthy. The guy has a lot of ability - that's just the bottom line. I think that now he's in a good mindset. He's feeling good about his body, and he can just go ahead and go after a play."

Chubb had the play of opening day when he chased down Wilson on a roll-out and forced a bad pass.

"It's not fun to try to block him," said coach Nathaniel Hackett.

Chubb, who's making nearly $14 million on his fifth-year option this season, acknowledged his injuries affected his mental well-being last summer.

"Yeah, 100%. When people talk about that mental health stuff, it's real," Chubb said. "The injuries, of course, always bring you down, but when you're injured, you kind of feel like you're away from the team. You don't feel like the person they brought you in here to be.

"I had a lot of battles with myself internally," Chubb continued. "My family knows, and everybody around me that's close knows. I'm past that now, and I'm good to go mentally, physically and all that. It was a tough ride, but I'm glad I'm on the other side of it."

Bolles scoffed when his scuffles with Chubb were brought up recently.

"Sometimes brothers have to fight to get the best out of each other, but it's healthy competition," Bolles insisted. "I love him dearly, I truly do. I think he's a phenomenal pass rusher. I'm grateful I get to go against a top player like him every single day.

"I think he's going to have a monster year."

And that would lead to a beastly contract.

"I've only been here a year and a-half, but he's had an incredible offseason," Paton said. "It's the first offseason he hasn't had to rehab and hasn't had a surgery. We're seeing the Bradley that I thought we were going to get when I got here.

"We're excited about Bradley Chubb. We want him here a long time."