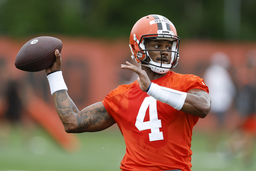 BEREA, Ohio (AP) The new lawsuits - and potential for more - against Deshaun Watson may have further damaged his image and swayed opinion about him.

However, they've only deepened his resolve.

The Cleveland Browns quarterback reiterated Tuesday that he never committed sexual misconduct alleged by two dozen women in Texas, adding he plans to keep fighting to clear his name.

"I never assaulted anyone," Watson said following practice as the Browns held their mandatory minicamp. "I never harassed anyone or I never disrespected anyone. I never forced anyone to do anything."

Watson, who is facing civil lawsuits from 24 massage therapists accusing him of sexual assault and harassment during private sessions when he played for the Houston Texans, stood by previous comments proclaiming his innocence.

While acknowledging his actions have impacted others, Watson maintained he's not done anything wrong.

"I just want to clear my name," he said.

Watson's comments were his first public ones since March 25, when he was introduced by the Browns after they persuaded him to waive his no-trade clause and signed him to a fully guaranteed, five-year, $230 million contract despite his legal troubles.

Since then, his entanglements have grown, with two more women filing lawsuits in the wake of other accusers detailing disturbing encounters with Watson on a report by HBO's "Real Sports with Bryant Gumbel."

There was also a New York Times report that Watson booked appointments with at least 66 different women over 17 months while he played for the Texans. And on Monday, attorney Tony Buzbee, who represents all the women suing Watson, said he plans to file two more lawsuits against the quarterback.

Watson, who was not indicted on criminal complaints by grand juries in two different Texas counties, may be losing the public relations battle. But remains staunchly adamant he hasn't broken any laws.

"I've been honest and I've been truthful about my stance," he said. "I never forced on anyone and I never assaulted anyone. That's what I've been saying since the beginning and I'll continue to do that until all the facts come out."

"We appreciate the Cleveland market and its fervent support with regard to its new quarterback, Deshaun Watson," he said. "But given the volume of the credible cases filed, the lead detective's sworn testimony, the undisputed facts, and the heartbreak, pain, and havoc Watson has caused, we think it would be appropriate to see Deshaun Watson express some regret or remorse in the way he treated these women, some of which have sued and many others who haven't, yet."

There's also the matter of the 26-year-old's football future.

The NFL is investigating Watson to determine whether the three-time Pro Bowler violated its personal-conduct policy. He faces a potential lengthy suspension, depending on findings by investigators who will present evidence to Sue L. Robinson, a former federal judge appointed jointly by the league and NFL Players Association as a disciplinary officer.

Watson spent several hours with league officials in Houston last month and said he was "open and truthful" during the interview sessions.

"I did everything they asked me to do," he said. "I answered every question truthfully that the NFL asked me. That's all I can do is be honest and tell them exactly what happened. I know they have a job and so I have to respect that, so that's what we wanted to do is cooperate.

"They have to make a decision that's best for the league."

Watson didn't answer a single question about football during his 12-minute session with reporters. He began the session with a statement thanking the Browns and their fans for support.

"I'm happy to be a Cleveland Brown," he said. "This is going to be my home for the rest of my career - that is the plan."

While standing by previous remarks, Watson acknowledged that comments he made in March may have negatively affected others.

"That includes males, females, everyone across the, the world. That's one thing I do regret is the impact that it's triggered on so many people. It's tough to have to deal with."

Watson and his legal team have maintained he won't settle the lawsuits. He was asked if the recent cases have changed that.

"I just want to clear my name and be able to let the facts and the legal procedures continue to play out," he said.

Until the league acts, the Browns are going forward as if Watson will be their starter this season. They signed veteran Jacoby Brissett as his backup, and coach Kevin Stefanski is comfortable the 29-year-old can handle starting duties.

"I do have confidence in Jacoby," Stefanski said. "He's played a lot of football for a young player. He's a smart player. He takes care of the football. Good size, can make all of the throws and those type of things."