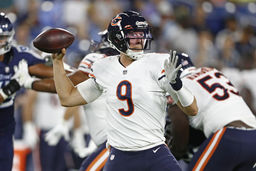 The Colts announced Monday they had signed Foles to a two-year contract that reunites the quarterback and coach who combined on a trademark play call to help the Philadelphia Eagles win the 2017 NFL title.

Foles adds depth behind 37-year-old Matt Ryan, the league's 2016 MVP whom Indy acquired from Atlanta in a March trade. And it gives Reich a proven backup, someone he knows well and who had long been rumored to be Indianapolis bound.

Foles spent the past two seasons in Chicago but appeared in only one game in 2021. The Bears were still paying him under the four-year, $88 million contract he signed with Jacksonville in 2019. Chicago released the 10-year veteran May 1.

It didn't take long for Reich and Foles to get back together.

Two weeks ago, they appeared together in Buffalo at Reich's Call to Courage Awards breakfast. Monday's announcement means they'll be spending time working at the Colts' complex, figuring out how best to use Foles and maybe even replicate his touchdown catch in the Super Bowl that was dubbed the "Philly Special."

"Frank was the one who recognized before the playoffs that the way that we were designing plays for me wasn't exactly my strength," Foles said on a November 2019 conference call, referring to the only season they were together in Philadelphia.

"He was someone who observed that and he impacted me because he recognized that in me."

A backup to Wentz in Philadelphia, Foles took over late in the 2017 season when Wentz injured his knee. He led the Eagles to the Super Bowl, outdueled Tom Brady in a 41-33 victory over New England and was the game's MVP.

He also helped the Eagles win a playoff game at Chicago the next season before joining the Jaguars. Foles barely played in Jacksonville after breaking his collarbone in the season opener.

He eventually landed in Chicago where he backed up Justin Fields last season.

By adding Ryan and Foles, the Colts have solidified a position where they didn't even have a clear starter in mid-March. They traded Wentz to the Washington Commanders after just one season. They got Ryan for a third-round pick when it became clear the Falcons were looking for Ryan's successor.

Now, with two Super Bowl-playing quarterbacks, the Colts have one of the league's most experienced quarterback depth charts.

Indianapolis released quarterback James Morgan to make room for Foles on the roster.