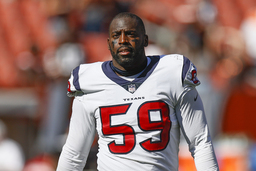 He was the 26th overall pick in the 2012 draft and spent his entire career with the Texans. Mercilus was one of the longest- tenured players on the team after most of the team's stars have been traded or released in recent years.

"There aren't many players in franchise history who have impacted our organization and community the way Whitney Mercilus has," Texans' owner Cal McNair said.

The 31-year-old appeared in six games this season with two starts for the Texans, who have won just one game. He has three sacks and four tackles for losses.

Houston coach David Culley said Wednesday that releasing Mercilus was a mutual decision and that the performance of some young players on the team factored into the move.