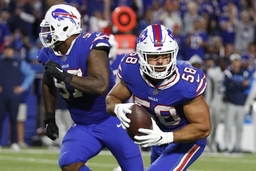 ORCHARD PARK, N.Y. (AP) If the Buffalo Bills are making some sort of loud statement by opening their season with consecutive routs, quarterback Josh Allen isn't about to raise his voice.

As he did following a 31-10 win over the defending Super Bowl champion Los Angeles Rams, Allen dismissed questions about the message the Bills sent by throttling the Tennessee Titans 41-7 in Buffalo's home opener on Monday night.

"When we execute how we know we're supposed to execute, success typically leads to success," Allen said. "We're just trying to be the best version of ourselves."

It made no difference to Allen whether the Bills earned some vindication against an opponent that had defeated them in each of the past two seasons.

"It doesn't matter who it's against. Like, that's a good team that we played," he said. "For us to go do that was great."

Allen threw four touchdown passes, including three to Stefon Diggs, and the Bills' defense did the rest, containing Derrick Henry and the Titans. Buffalo forced four turnovers, including linebacker Matt Milano returning the second of Ryan Tannehill's two interceptions 43 yards for a touchdown.

Buffalo never trailed and blew the game open by outscoring the Titans 24-0 in the third quarter. The surge began in the final minute of the second quarter when Buffalo went ahead 17-7 on Allen's 4-yard touchdown pass to Diggs.

Allen topped 300 yards passing for the 15th time of his career, completing 26 of 38 attempts for 317 yards, and sat out the entire fourth quarter. Diggs had 12 catches for 148 yards. He has exceeded 100 yards in each of his first two games, a feat accomplished previously for the Bills only by Hall of Famer Andre Reed.

"It was a lot left on the bone, really," Diggs said with a shrug. "We had a lot of points. I think we had one punt and I think it came back to us. But just doing your job, and at this point we're doing OK I guess."

The two-time defending AFC South champions face numerous questions about a defense that gave up 313 yards passing a week after allowing 238 yards rushing. Meantime, their offense mustered 187 yards, managed 12 first downs and had two of 11 drives finish in Bills territory.

"We got our (butts) kicked, plain and simple," coach Mike Vrabel said after the most lopsided loss in his four-plus seasons coaching the Titans. "They outplayed us and they outcoached us, and that's the definition of it. We're going to go back to work and try to figure out how to win a football game."

While Tannehill was benched after throwing his second interception, the Titans' Henry-led running game continued to be grounded.

The two-time rushing champion was limited to 25 yards on 13 carries while scoring on a 2-yard plunge.

"I pride myself on making plays and being a playmaker for this team. And I didn't do that tonight," Henry said. "They were the better team tonight in all three phases, the whole game. We just weren't good enough. At all."

Injuries affected both teams, the most serious involving Bills cornerback Dane Jackson, who hurt his neck in a troubling collision with a teammate and was taken to a hospital for evaluation. The Bills said Jackson had full movement in his limbs.

Coach Sean McDermott said Jackson was still awaiting test results. The entire Bills team gathered around Jackson as he was loaded into an ambulance on the field.

"You go from being a coach to just a human. That's a real moment," McDermott said. "Just praying for him. It's an unfortunate situation."

Tannehill finished 11 of 20 for 117 yards and was benched following Milano's interception with 3:49 left in the third quarter. Rookie Malik Willis took over, and if Tannehill continues to struggle, Tennessee fans will want to see more of the young backup.

Vrabel stressed he benched many of his starters to protect them from getting hurt.

Bills Hall of Fame defensive end Bruce Smith asked fans for a moment of silence before the game to honor the memory of 10 people killed in shooting spree at a Buffalo supermarket in May.

"We stand united with the victims and the victims' families," Smith said.

"No one can erase their pain and suffering. But Buffalo, your acts of love and kindness will never be forgotten," he added. "The national media, the national activists have all gone. But we are here right now. It is up to us to love these families. To be with them."

Bills: S Micah Hyde sustained a neck injury. ... Milano did not return because of what was termed a stinger. ... DT Jordan Phillips hurt his hamstring. ... No. 2 WR Gabe Davis was inactive after hurting his ankle in practice on Saturday. ... DTs Brandin Bryant and C.J. Brewer were elevated from the practice squad to fill in for injured starter Ed Oliver (ankle) and backup Tim Settle (calf).

Bills: At the Miami Dolphins on Sunday.