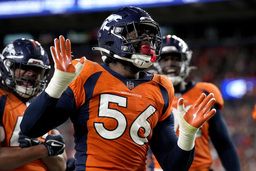 DENVER (AP) Third-year defensive tackle McTelvin Agim's spot on the Denver Broncos roster is all but assured. Still, he went into the final tune-up determined to stand out in case he finds himself looking for work.

Agim forced two fumbles and broke up two passes in the Broncos' 23-13 preseason win over the Minnesota Vikings on Saturday night, and his best play, a strip-sack of Sean Mannion, led to Baron Browning's 17-yard fumble return for a touchdown just before halftime.

"That was my mind-set," Agim said, "just put the best film out there so all 31 other teams see it, as well."

Both teams rested their starters in the preseason finale, and none of the four backup quarterbacks threw a touchdown.

Browning, whom the Broncos (2-1) moved from inside linebacker to the edge this year, stunted up the middle and nearly pried the ball from Mannion's grasp himself as he swept past him in the final minute of the first half.

Agim was right there to slap the ball out as he wrapped up Mannion from behind for a 10-yard sack. Browning reached back, grabbed the ball with his right hand and zipped into the end zone to give Denver a 17-7 lead.

"That was a killer," Vikings rookie head coach Kevin O'Connell said. "Sean's trying to get ready check the ball down. We coach real hard to have two hands on it in the pocket."

Mannion got the Vikings, who went winless in the preseason, to midfield for Greg Joseph's 46-yard field goal as time expired, cutting Minnesota's deficit to 17-10 at halftime.

Joseph's 58-yarder five seconds into the fourth quarter made it 17-13 and the Vikings were driving again when safety rookie safety Dalarrin Turner-Yell returned from a concussion check to sack Kellen Mond on fourth-and-goal from the Denver 5.

Brandon McManus capped the scoring with a pair of field goals over the final 3:19.

Like Cousins, Russell Wilson didn't play at all in the preseason. Brett Rypien was 14 for 21 for 137 yards in the first half and Josh Johnson threw for 107 yards on 11-of-14 passing.

Wilson dressed out in full pads and even put on his eye black to watch the action from the sideline with Denver's other resting starters were decked out in street clothes.

He also had a headset and a microphone to listen to rookie head coach Nathaniel Hackett calling the offensive plays and consulting with offensive coordinator Justin Outten.

"So, he got to hear how I talked to the coaches and how I call plays," said Hackett, whose first real-game experience with Wilson will be in the opener at Seattle.

Rypien drove the Broncos to the Minnesota 8 on Denver's opening possession but his throw over the middle to K.J. Hamler on first-and-goal was tipped by Myles Dorn and intercepted by Luiji Vilain.

Johnson drove Denver on a pair of drives that ended in field goals. McManus' 40-yarder made it 20-13 with 3:19 remaining.

Rookie Nik Bonnito recorded consecutive sacks of Mond, Agim batted down his fourth-and-27 pass with 2:07 remaining, and Denver took over at the Vikings 8. McManus added a 31-yard field goal in the waning seconds.

Minnesota's first touchdown came on Bryant Koback's carry on fourth-and-goal from the 1. Officials initially ruled he was stuffed by Turner-Yell but the Vikings won the challenge, giving them a 7-3 lead.

Montrell Washington's 11-yard TD on a reverse gave Denver the lead for good at 10-7.

The Broncos have been dreadful on special teams for several years and things didn't look much different Saturday night as returner Jalen Virgil muffed the opening kickoff, knocking the ball out of bounds at the 2.

In the third quarter, Broncos snapper Jacob Bobenmoyer inexplicably carried the ball several yards across the goal line for a touchback that left punter Sam Martin perplexed as to why he didn't just down the ball inside the 10.

Vikings: DL T.Y. McGill Jr. (ankle) and LB Troy Dye (foot) both were injured in the first quarter and didn't return. WR Jalen Nailor was ruled out with a concussion early in the third quarter. WR Bisi Johnson left shortly thereafter with what O'Connell feared was a serious knee injury.

The Vikings open the season at home against rival Green Bay on Sept. 11.

The Broncos open at Seattle in Wilson's homecoming on Monday, Sept. 12.