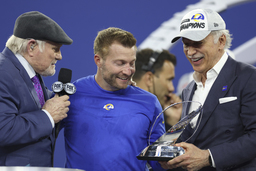 INGLEWOOD, Calif. (AP) After Matthew Stafford's wife leaped into his arms, he took a moment to soak it all in - this victory, this confetti-strewn field, this remarkable year of his life.

One year to the day after the quarterback agreed to join the star-studded Los Angeles Rams for a shot at a ring, their chances were dimming rapidly when they headed into the fourth quarter of the NFC championship game down by double digits to the mighty San Francisco 49ers.

But with three gritty scoring drives followed by a cathartic defensive stand, the Rams secured the right to stay home for the Super Bowl - and Stafford shone the brightest in this impressive constellation.

Travin Howard made a game-sealing interception with 1:09 to play, and the Rams roared back in the fourth quarter to secure a spot in the Super Bowl at their home stadium next month with a thrilling 20-17 victory Sunday night.

"You can't write the story any better," Stafford said. "I'm at a loss for words. I'm just having a blast playing ball with these guys and, shoot, we've got one more at the home stadium. Let's get it done."

Stafford passed for 337 yards and hit Cooper Kupp with two touchdown passes for the Rams (15-5), who began the fourth quarter down 17-7. But after Kupp's second TD catch and a tying field goal on a drive extended by Jaquiski Tartt's brutal dropped interception, the Rams drove for Matt Gay's go-ahead, 30-yard field goal with 1:46 to play.

Los Angeles' defense then won it when Aaron Donald got hold of Jimmy Garoppolo and forced him to fling a pass toward JaMycal Hasty. The ball caromed high in the air off Hasty's hands and came straight down to Howard - and it was secured by the fourth-year pro who only recently got a prominent role on LA's defense.

"I've got total trust and confidence in that defense, man," said Stafford, the 13-year veteran who never won a playoff game before this month. "They've been unbelievable all year. Way to freakin' ice the game. I loved it."

Kupp finished with 11 catches for 142 yards in his latest spectacular game, while Odell Beckham Jr. punched his ticket to his first Super Bowl with yet another strong performance by Los Angeles' midseason acquisition, making nine catches for 113 yards.

"The story could not be written any better for us to play them in the NFC championship and then shut the door," Beckham said of the 49ers.

The Rams won their second conference title in the past four years under coach Sean McVay and moved one step from the franchise's second championship in the Super Bowl era.

Perhaps even more impressively, Los Angeles finally snapped a six-game losing streak against its San Francisco archrivals, who secured their playoff berth with an overtime comeback victory in Inglewood just three weeks ago.

"I think we knew what a great team this was, but our guys genuinely knew that what happened in the previous six games had nothing to do with what was going to happen when we kicked this one off," McVay said.

The Rams have only won twice when trailing by double digits in the second half during McVay's half-decade in charge - and both victories were in conference championship games.

Deebo Samuel and George Kittle caught touchdown passes from Garoppolo, who passed for 232 yards in a heartbreaker for the 49ers (12-8). While San Francisco's defense faltered late, coach Kyle Shanahan also punted twice from the Rams' half of the field and a third time from the 50, and that caution likely ended up costing the Niners.

"I thought we had them on the ropes, but we gave them a chance," Shanahan said. "When you give those guys too many chances, eventually they are going to make them."

San Francisco also will lament its late-game execution, but no mistake was bigger than the dropped interception by Tartt, who could have put the Rams in dire straits moments after McVay wasted his final timeout on a failed challenge early in the fourth quarter.

"I felt confident the entire game," Kittle said. "Felt we were calm. They just made real good play. The Rams have superstars all over the field."

Those stars started slowly: Stafford threw a tipped end-zone interception on the Rams' second drive, and the Niners answered a subsequent 97-yard LA scoring drive with yet another moment of brilliance from Samuel. The All-Pro caught an inside screen pass and rampaged through the Los Angeles defense, diving to the pylon for his first career postseason scoring catch.

The Rams appeared to be in real trouble when San Francisco's defense stopped them on downs near midfield in the third quarter and Garoppolo hit Kittle for his second TD pass moments later. But Los Angeles kept it close with a gritty drive ending in Kupp's 11-yard TD catch early in the fourth quarter.

After 54 consecutive Super Bowls without an NFL team playing in its home stadium, the Rams are the second team to do it in two seasons after Tampa Bay broke the streak last year.

McVay unsuccessfully challenged two calls in the second half, failing to overturn a fourth-down spot for his offense or a potential Niners fumble. The decisions - and another wasted timeout before a first-down play - left Los Angeles with no timeouts and 10:01 to play.

49ers: LB Demetrius Flannigan-Fowles hurt his knee in the first half and didn't return. ... LB Dre Greenlaw injured his calf in the first half. ... DE Arden Key was evaluated for a head injury at halftime.

49ers: The season is over. San Francisco made five NFC title games in the past 11 years, but won no rings.

Rams: A showdown with Joe Burrow and the impressive Bengals on Feb. 13 in the Super Bowl with two starting quarterbacks who were both No. 1 overall picks. The other came six years ago when Peyton Manning faced Cam Newton.